Updates in screening and treatment of leading gastrointestinal cancers

Updates in screening and treatment of leading gastrointestinal cancers

Gastrointestinal cancers can occur from the esophagus to the anus and in structures such as the pancreas and liver. Douglas A. Nelson, M.D., provides updates on the latest treatments. 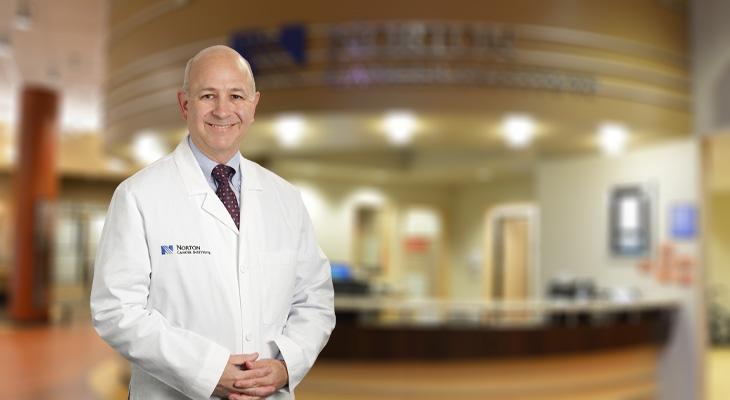 Gastrointestinal cancers can occur anywhere from the esophagus to the anus and in attached structures such as the pancreas and liver. They include the second- and third-deadliest cancers in the United States.

“We’ve seen a huge increase in colorectal cancer in the under-50 population,” Douglas A. Nelson, M.D., hematologist/oncologist with Norton Cancer Institute, said during a continuing medical education presentation, “Review of GI Malignancies,” on the “MedChat” podcast.

National guidelines now recommend screening with colonoscopy at age 45, instead of 50, for people with average risk.

Colonoscopy remains the gold standard for detecting colon cancer because a biopsy can be taken and polyps can be removed during the procedure, while noninvasive tests still can play a role in screening for colon cancer in patients who can’t or won’t undergo a colonoscopy, according to Dr. Nelson.

Pancreatic cancer ranks 10th for men and 8th for women in terms of estimated new cancer diagnoses in the United States, according to the American Cancer Society. But pancreatic cancer is third in cancer deaths and expected to pass colorectal cancer to become the second-leading cause of cancer death in the next 10 years.

There are no national screening guidelines for gastric cancer in the U.S. Genetic or hereditary syndromes can increase the risk of pancreatic cancer. A significant family history and/or known genetic mutations, might qualify a patient for a screening program, which is typically done at larger cancer centers.

Multidisciplinary treatment involving a medical oncologist, a surgical oncologist and a radiation oncologist is especially critical for pancreatic cancer. Because the pancreas is located in the central part of the abdomen, treatment with surgery or radiation is more difficult. Surgical management of pancreatic cancer is highly specialized, and there’s value in working with a surgeon who performs this surgery on a regular basis, according to Dr. Nelson.

Pancreatic cancer tends to be aggressive and discovered at a more advanced stage. New combinations of chemotherapy drugs appear to be more successful than single agents, but even when pancreatic cancer is caught early, a large percentage of patients recur despite treatment.

To refer a patient to Norton Cancer Institute, visit Norton EpicLink and open an order for Oncology.

Gastric cancers are related to high-salt diets and, as a result, are more prevalent in countries such as China, Japan, Korea and Russia. In the United States, there is a higher incidence in African Americans, Latinx populations, and immigrants from some of the higher-risk countries.

There are no national screening programs or recommendations for gastric cancers. Clinicians should be on the lookout for concerning symptoms, including a history of ulcers or unexplained abdominal pain that doesn’t respond to treatment with proton pump inhibitors, and unexplained weight loss, according to Dr. Nelson.

Infection with the intestinal bacteria H. pylori is a significant risk factor for gastric adenocarcinoma and gastric lymphomas.

lymphoma, or a very early gastric cancer, should be tested for H. pylori,” Dr. Nelson

With esophageal and gastric cancers, immunotherapy has shown recent success and is now well accepted as first-line treatment, often in combination with chemotherapy.

“Some people think it’s related to increasing obesity. Reflux can certainly play a role, and perhaps other dietary factors that have not been identified,” Dr. Nelson said.

Genomic testing now plays an important role in the pathological workup of gastroesophageal cancers, and molecular findings can determine the treatment approach.

For example, with gastroesophageal cancer, a small percentage of patients have a feature of pathology known as microsatellite instability, a marker not only for a better prognosis but an extreme sensitivity to immunotherapy. PDL1 status is another marker for the likelihood of benefitting from immunotherapy.

With primary liver cancers, the main risk factor is cirrhosis, which produces chronic scarring and liver inflammation that provides the appropriate background for the cancer to form.

“These are folks who actually have two very serious medical conditions, either one of which could potentially be a threat to their life,” Dr. Nelson said.

For example, a small lesion in a healthy liver can be surgically resected. The same patient with advanced liver disease needs to be considered for a transplant.

Cirrhosis is classically related to alcohol, viral infections, hepatitis B and hepatitis C. More recently, there has been a higher incidence of nonalcoholic steatohepatitis (NASH), which also is called nonalcoholic liver disease and is often associated with obesity. NASH has in rare cases led to chronic inflammation of the liver and hepatocellular cancer.

The frequent challenge of treating people with hepatocellular cancer is the presence of chronic liver disease. Patients with advanced liver disease may not be eligible for systemic therapies. However, liver-directed therapies can include transarterial chemoembolization, where chemotherapy drugs are injected into the branches of the hepatic artery that are feeding the tumor, and radioembolization, where radioactive spheres or beads are injected directly into the arterial circulation feeding the tumors. Immunotherapy often is considered first-line treatment for advanced liver cancer.