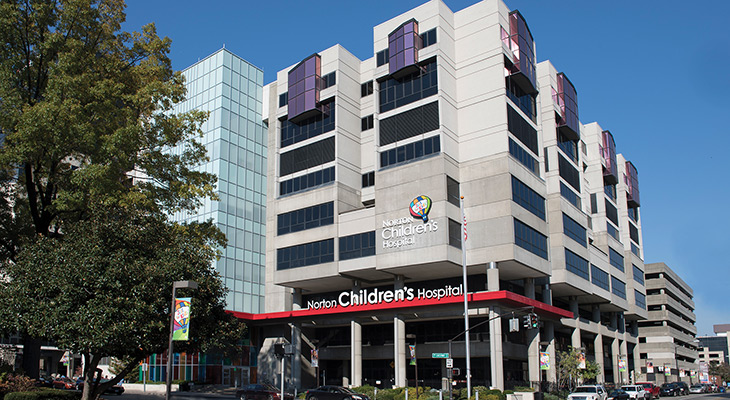 This new surgical approach is less invasive and can have a much shorter recovery time than a craniotomy.

Visualase is the manufacturer. The system makes surgery possible for more high-risk patients with deep brain lesions because the laser probe traces a far narrower path to the lesion. Open surgery on these patients would be impossible because of damage to surrounding brain tissue.

The MRI-guided fiber optic laser requires only a 3.2-millimeter hole in the skull, which can be closed with a single suture and does not require any of the patient’s hair to be removed.

“It allows us to much more safely get to deep targets in the brain and to treat difficult-to-reach lesions,” said William C. Gump, M.D., pediatric neurosurgeon with Norton Neuroscience Institute. “This is an important next step in treating cases that were hard to treat before.”

Prior to surgery, a frame is placed on the patient’s head and a CT scan orients the frame in three dimensions. Computer software plots the safest pathway to the lesion.

The surgeon then inserts a laser applicator, which is about the diameter of a strand of spaghetti, and the patient is taken to an MRI scanner to confirm the placement of the laser. After a test firing, the laser is heated to destroy the lesion.

A computer readout shows where and how much tissue is being heated. Using a laser guided by real-time MRI allows for pinpoint destruction of soft tissue.

The pediatric patient typically is under general anesthesia for four hours or more during laser ablation surgery. Most of that is time is preparation for treatment. The laser ablation takes only minutes. Most patients are typically discharged the day after surgery.

A child may benefit from laser ablation if he or she has:

Laser ablation surgery can be performed on children as young as 1 year old, according to Dr. Gump.