Based on the his anatomy, the patient was an excellent candidate for an endovascular stent. 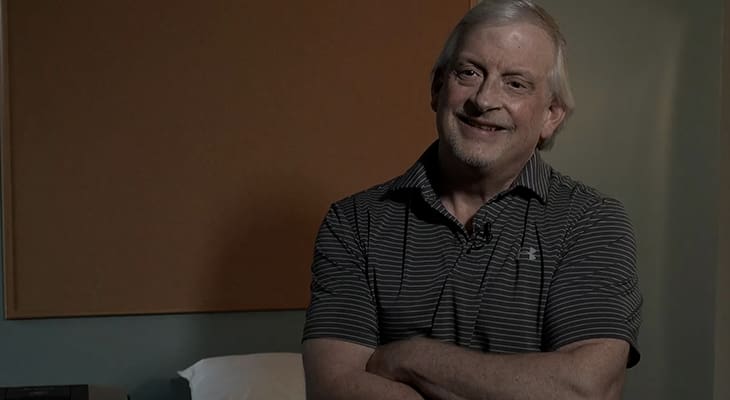 Visiting Louisville on a business trip, Rob Priest thought he might have come down with a terrible case of food poisoning. The pain was so bad that he called 911 from his hotel.

When Rob arrived by ambulance at Norton Audubon Hospital, he learned the truth was far worse than a tainted meal. Rob had a ruptured abdominal aortic aneurism.

“I was in a life-threatening situation,” Rob said. “I had bled 40% of my blood into my body cavity

Ferenc P. Nagy, M.D., a vascular surgeon with Norton Heart & Vascular Institute, was on call when Rob arrived at the hospital.

“A person who has a ruptured aneurysm is actively dying because there is no way for the body to stop that bleeding on its own,” Dr. Nagy said.

Dr. Nagy compared Rob’s situation to a pipe bursting in a house. The pipe needs to be replaced or rerouted — quickly. In Rob’s case, Dr. Nagy chose to insert stents rather than perform surgery.

A computed tomography (CT) scan in the emergency department showed the location of the aneurysm in Rob’s abdomen. The artery had grown some four to five times its normal size before bursting, according to Dr. Nagy.

“Based on his anatomy, he was an excellent candidate for an endovascular stent [procedure] to be performed, to essentially seal off his aneurysm,” Dr. Nagy said. “His other option would have been a large, open aneurysm repair, which is still a fine operation but has higher risks of complications following surgery.”

“With the stenting procedure, we’re able to realign his blood flow. We’re fitting a new pipe inside the pipe that burst on him,” Dr. Nagy said. “You essentially are diverting all of his blood flow within the new pipes back down to normal areas, and you’re preventing any blood from getting into the aneurysm.”

Rob’s wife, Kelly, who had driven to Norton Audubon Hospital from their home outside Dayton, Ohio, knew how gravely ill her husband was. When she saw him after the procedure, she was overwhelmed by emotion.

“Once he looked at me, tears of joy came because I knew he was alive, and we had come through this,” Kelly said.

According to Dr. Nagy, Norton Heart & Vascular Institute has a dedicated team to handle emergency cases like Rob’s, where time is critical, and a patient’s life is in the balance.

“Within a half-hour, the team was in, and we were setting up,” Dr. Nagy said. “I don’t feel like there’s a better place in the city that can take care of aneurysm disease. I think we handle things correctly. We follow patients correctly. We are attentive to the patient’s needs, and I think we communicate well with both our patients and our referring doctors.”

Most people with aneurysms don’t realize they have them unless they are being examined for another reason, according to Dr. Nagy. For example, someone might learn they have an aneurysm when they go the emergency room thinking they have a kidney stone.

Risk factors for abdominal aortic aneurysms include age, being a current or past smoker, being male, being white, having an aneurysm elsewhere and having a family history of aneurysm.

“There is some benefit of having some screening at 65,” Dr. Nagy said.

Once someone has had an abdominal aortic aneurysm, they are at risk for aneurysms elsewhere and need to be monitored closely. Rob could have chosen to see a doctor closer to home for his follow-up. He chose to stay with Dr. Nagy, who has found aneurysms in both of Rob’s legs.

“I’m very confident I’ve got the right people keeping an eye on me,” Rob said.