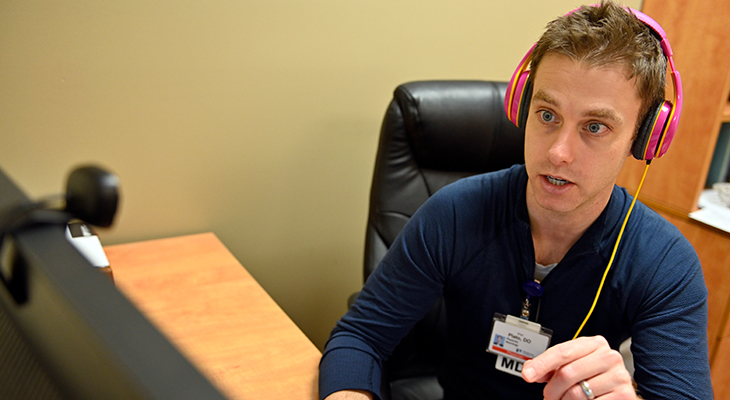 A drug used to relieve a cluster headache cycle also can help with subsequent cycles if patients continue the therapy, according to a new study by Norton Neuroscience Institute neurologist Brian M. Plato, D.O.

Episodic cluster headaches are severe headaches during periods of a week to several months. The headache cycles are separated by pain-free periods of at least three months — and as long as several years.

Galcanezumab, which is sold under the brand name Emgality, has been shown to reduce the number of attacks during a headache cycle. Dr. Plato’s study shows the Food and Drug Administration-approved medication can provide relief in subsequent cycles.

Patients who took part in a study testing galcanezumab during an initial cycle of headaches were allowed to take the drug to see how it worked during a second cycle.

After the first headache cycle, they simply continued taking a monthly shot of galcanezumab until the next cycle of headaches arrived.

Use Norton EpicLink to quickly and easily refer a patient to Norton Neuroscience Institute.

“This offers some glimmer of hope that if you responded in the past, you’re more likely to respond again in the future,” said Dr. Plato, who is board certified in neurology and headache medicine.

Episodic cluster headaches are rare, affecting an estimated 1 in 1,000 people.

“The pain associated with cluster headaches is the most severe pain humans can experience,” Dr. Plato said.

According to Dr. Plato, some women who experience cluster headaches report that childbirth is less painful than the headaches.

Attacks of pain during a cluster headache can last anywhere from 15 minutes to three hours, typically behind or around one eye. They average 30 minutes. During a headache cycle, people with episodic cluster headaches will have multiple attacks per week, sometimes multiples attacks in a day.

In addition to the pain, the headaches can cause excessive tearing, swelling of the eye and a drooping eyelid. They also can cause sweating and a stuffy or runny nose on the affected side of the face.

“People who have cluster headaches live a part of their lives in absolute fear of what happens when this comes back,” he said.

Episodic cluster headaches are not a type of migraine, although sometimes the condition is misdiagnosed as migraine or sinusitis, according to Dr. Plato.