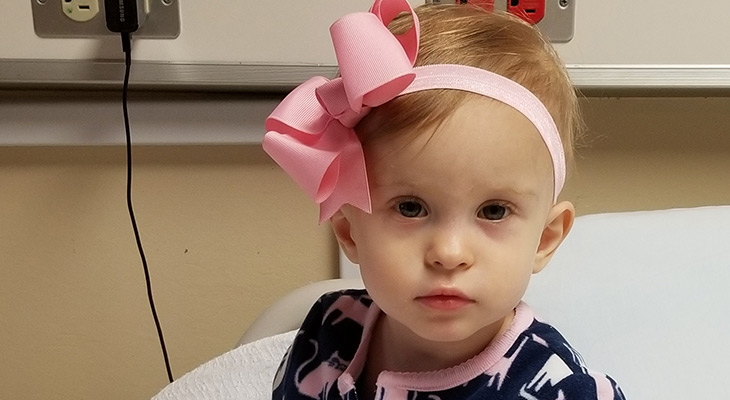 Emaleigh Smith was born with a heart murmur, so her parents were on the lookout. At about 10 months, she started having unexplained eating issues, including food aversion. She started on feeding therapy.

After about eight months, a computed tomography (CT) scan showed neuroblastoma in her chest, near vertebrae — hugging her aorta.

Emaleigh was admitted to Norton Children’s Hospital on April 26, 2018 — the day after her CT scan. David S. Foley, M.D., pediatric surgeon with Norton Children’s Surgery, affiliated with UofL School of Medicine, did Emaleigh’s tumor biopsy the next day. She also had a bone marrow biopsy.

During the next six months Emaleigh spent a lot of time in and out of the Addison Jo Blair Cancer Care Center at Norton Children’s Hospital, under the care of the team at Norton Children’s Cancer Institute, affiliated with UofL School of Medicine. The goal was to shrink the tumor and prevent any spread.

Emaleigh underwent chemotherapy and eventually surgery. Her mother, Andrea, recalls that at one point she thought: How could this tiny, 17 1/2-pound girl handle all of this?

Surprisingly well, as it turned out. Emaleigh never let anything keep her down. She played as usual. She was always excited to meet new people and would run up to hug them or shake their hands.

“We nicknamed her ‘The Mayor’ because she never met a stranger,” Andrea said.

During inpatient stays the nurses gave Emaleigh an extra-long IV line so she could be mobile. The active toddler often visited the nursing station and offices where everyone recognized her joyful babbling.

“The staff was wonderful. We became like family,” Andrea said.

In late May 2018, after two rounds of chemotherapy, tests showed that the cancer hadn’t spread to Emaleigh’s bone marrow. Since the tumor in the toddler’s chest hadn’t spread, surgical removal was a viable option.

Dr. Foley scheduled surgery for late June. He cautioned they might be able to remove only 85% of the tumor that was so near Emaleigh’s aorta and vertebrae. After the three-hour procedure he happily reported: They were able to get it all.

Emaleigh got four more rounds of chemotherapy to make sure her lymph nodes were clear of suspicious cells. Her last treatment was Sept. 17, 2018.

Follow-up scans brought the best news yet: Every test and tumor margin were clear.

A very low risk of recurrence

Emaleigh continues to do well. She still talks with everyone she meets. She enjoys her beloved collection of Minnie and Mickey Mouse toys, many of which came from people touched by her spirit. And, she adores her brother, Zachary, who is approaching his first birthday.

Kerry K. McGowan, M.D., hematologist/oncologist with Norton Children’s Cancer Institute, told the Smiths that Emaleigh’s risk of recurrence is not zero, but is very low.

“She has a personality bigger than a star. She is happy and smart, and all the things she should be,” Andrea said. “That’s what I focus on.”

To refer a patient to Norton Children’s Cancer Institute,
use our online form.