The American College of Obstetricians and Gynecologists, the American Academy of Pediatrics and the American Society of Addiction Medicine agree all pregnant women should undergo a screen for drug use. 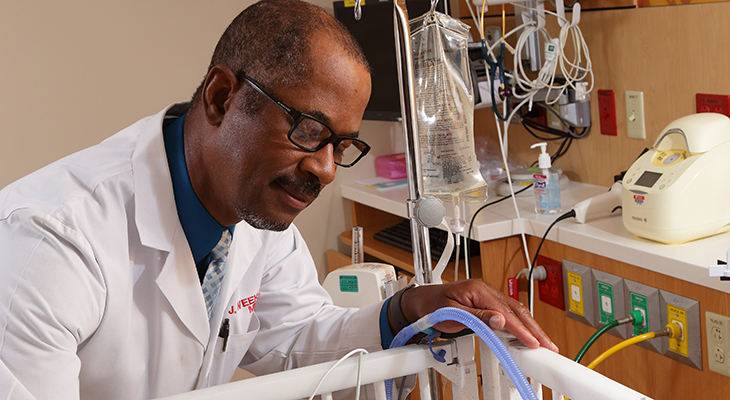 Successfully treating pregnant women for opioid use requires building a relationship with the patients, who often are experiencing shame and guilt as a result of their drug use, according to Jonathan W. Weeks, M.D., maternal-fetal medicine physician with Norton Children’s Maternal-Fetal Medicine.

“I don’t let my moral, ethical feelings come out in the way I interact with the patients. I don’t judge them,” said Dr. Weeks, who is also medical director of the  Norton Maternal Opiate Substance Treatment (MOST) Program. Dr. Weeks spoke during a recent episode of the “MedChat” podcast continuing medical education opportunity.

Opioid use among pregnant women is common. Centers for Disease Control and Prevention (CDC) data estimates 14% to 22% of women filled prescriptions for opioids during pregnancy. Among pregnant women taking opioids, a national survey conducted in 2019 by the Pregnancy Risk Assessment Monitoring System, a project of the CDC and state health departments, found more than 1 in 5 reported misusing the drugs.

The American College of Obstetricians and Gynecologists, the American Academy of Pediatrics and the American Society of Addiction Medicine agree all pregnant women should undergo a screen for drug use.

The American College of Obstetricians and Gynecologists recommends a simple, four-question screening tool that goes by the acronym T-ACE:

“If you get a positive response to any of those — generally yes to one or more questions — then the patient should be referred for further evaluation,” Dr. Weeks said.

Maintaining a positive relationship with the patient

Urine tests on all pregnant women risk undermining the doctor-patient relationship, according to Dr. Weeks.

“The patient should be a partner in this. If you’re just doing universal screening and then you later spring a positive result on them, it’s a loss of trust. Over time, it can discourage patients from presenting for care,” Dr. Weeks said.

If a toxicology screening is done, the patient should be part of the process, he added. If the screen is positive for an illicit drug, Dr. Weeks does a confirmatory test in patients with no prior history to rule out false positives. If the second test, too, comes back positive, Dr. Weeks recommends a phone call.

“I like to call the patient personally, if I can, or someone they’ve met in the office and established a relationship with, and tell them we have a positive screen,” Dr. Weeks said.

On the call, he said he stresses that his interest is providing help and that resources are available to help protect the woman and baby. He then encourages the patient to come in to talk more.

Some patients will ask for help; others will admit they used drugs — but only before they knew they were pregnant.

“You sort of have to move on from whatever the patient gives you,” Dr. Weeks said.

Taking a heavy-handed approach with one patient — telling her to go into treatment or face child protective services — likely will be counterproductive, according to Dr. Weeks.

“That may get us a reasonable solution for that one patient, but the word in the community is going to get out very quickly. In the end, what happens is people don’t come in for care,” Dr. Weeks said. “They’ll avoid care; they’ll avoid screening, and their babies will be endangered also.”

Effects of illicit drug use in pregnancy

Any illicit drug use during pregnancy, including marijuana, will double the risk for preterm labor, poor fetal growth, intrauterine growth restriction, stillbirth and bleeding during pregnancy.

Use Norton EpicLink to quickly and easily refer a patient to Norton Children’s Maternal-Fetal Medicine.

Opioids, in particular, suppress fetal growth, though they do not appear to increase birth defects. Also, bleeding is less common for opiate abuse, compared with cocaine and methamphetamines.

Poor nutrition and smoking also contribute to obstetrical complications in babies born to mothers abusing opioids during pregnancy. Some 80% of patients who have opioid use disorder smoke, usually heavily, according to Dr. Weeks.

Babies with chronic opiate exposure of a sufficient dose will be born with neonatal opiate withdrawal syndrome, formerly known as neonatal abstinence syndrome.

The Norton MOST Program began four years ago with the goal of getting women treatment for their pregnancy and their addiction as early as possible.

“Most patients were coming in for care at 24 weeks gestation or greater,” Dr. Weeks said.

The focus of the program is quick access and stabilization. Women are admitted, started on prenatal vitamins, basic counseling and medications to relieve their withdrawal. Anti-nausea medications, antidiarrheals, Tylenol, and short courses of nonsteroidal anti-inflammatory medications are also used, according to Dr. Weeks.

Patients who want a medication-assisted approach would start therapeutic opiates to help with their addiction, Dr. Weeks said in the podcast.

After Norton MOST Program participants are evaluated and stabilized, the program refers the women for continuing obstetrical care. Obstetricians are more likely to accept these patients since they have been evaluated and stabilized, and addiction centers are more likely to accept pregnant women who have been screened and have an obstetrical provider on board, according to Dr. Weeks.

The success of the program is built on a team that establishes a rapport with the patients, offering empathy and, on occasion, tough love.

“If you’re putting together a program, or thinking about that, you need a team of empathetic folks who are passionate,” Dr. Weeks said.