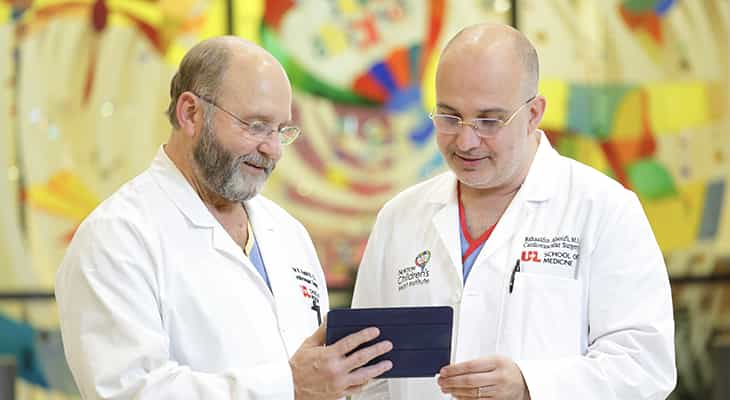 For a boy born at 37 weeks weighing just more than 7 pounds, the coordinated prenatal care and preparation for his first hour of life were essential for survival. The boy’s planned delivery with immediate resuscitation preceded an emergency balloon atrial septostomy and placement of atrial stent in the cardiac catheterization laboratory within the first hour of his life.

Two days later, the boy was in surgery undergoing a complex palliative operation. The baby underwent the conventional Norwood procedure with homograft arch reconstruction and the use of a modified Blalock-Taussig shunt to provide pulmonary blood flow. Additionally, to address his dilated dysfunctional mitral valve and left ventricle (which usually interfere with cardiac function and contribute to the reported 90% mortality of this lethal combination), he underwent partial left ventriculectomy and mitral valve closure, in addition to atrial septectomy and stent removal.

After nearly seven weeks at Norton Children’s Hospital, the boy was discharged. He underwent Glenn bidirectional cavopulmonary connection and pulmonary artery augmentation at 6 months and has been doing well at home without oxygen support.

“The surgical approach that we adopted (Norwood and partial left ventriculectomy) addressed the hemodynamic insult of the dilated left ventricle and mitral regurgitation and provided survival in a very challenging neonate,” the doctors wrote. “We predict he will complete his third palliation stage without contraindication.”