Hormonal and nonhormonal options are available to treat the cause of the bleeding. 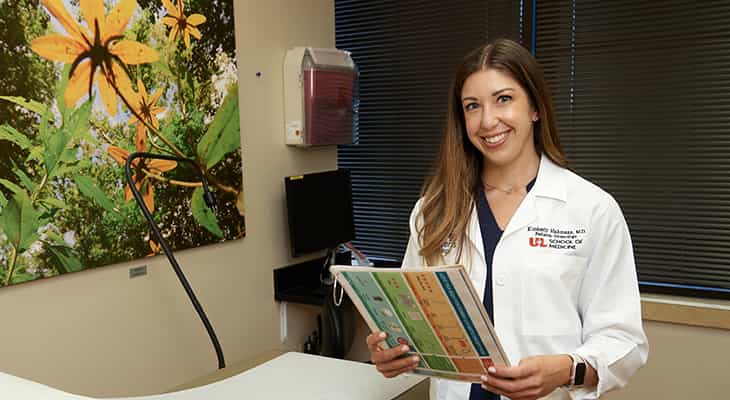 One of the most common reasons adolescents have heavy menstrual bleeding is they’re having anovulatory periods — they aren’t releasing an egg monthly from an ovary, so when they do bleed it’s because the uterus lining has outgrown the blood supply.

“This is the reason why you have cycles that are every 21 to 45 days, and they might be a little bit heavier and might last a little bit longer than usual. This is very common the first three to five years after periods start, and by the three-year mark, about 95% of cycles are ovulatory,” Kimberly S. Huhmann, M.D., pediatric and adolescent gynecologist at Norton Children’s Gynecology, affiliated with the UofL School of Medicine, said during a recent continuing medical education opportunity.

Ruling out a bleeding disorder

Patients who come in with regular and heavy bleeding may be among the 20% or so of those with heavy menses who have a bleeding disorder, according to Dr. Huhmann.

One or more of the following conditions should raise the possibility of ordering labs to rule out a bleeding disorder such as von Willebrand disease.

Providers who do have concerns for anemia or bleeding disorder — or if the CBC comes back with hemoglobin less than 10 — bleeding disorder labs would include a coagulation study and a von Willebrand panel. A consultation with hematology for platelet dysfunction testing and a pelvic ultrasound for persistent unexplained bleeding may be appropriate in specific situations.

Use Norton EpicLink to quickly and easily refer a patient to Norton Children’s Gynecology.

For acute treatment, the preferred therapy is a medroxyprogesterone (Provera) taper — 20 milligrams three times a day for seven days, followed by 20 milligrams daily for 21 days. This is preferred over the combined oral contraceptive pill taper due to risks of side effects from high estrogen dosing such as nausea, vomiting, mood changes and headaches.

Long-term management starts with treating any underlying cause of the bleeding. Second, there are hormonal and nonhormonal options. Ibuprofen the night before the period and continuing through the first few days can reduce flow by up to 80%. Tranexamic acid, an off-label use for patients under 18, can be used for acute bleeding as well as long-term bleeding at up to 1,300 milligrams three times per day for five days.

“When using the combined oral contraceptive pill, we recommend that you use at least a 30 microgram ethinyl estradiol and a monophasic pill,” Dr. Huhmann said, offering Sprintec and Junel as examples with the monthly cycle or Seasonique every three months.

For patients who need contraception, but want to use a progesterone-only pill, 0.35 milligrams norethindrone (Micronor) or 4 milligrams drospirenone (Slynd) are options.

Other options for contraception and menstrual regulation include medroxyprogesterone acetate (Depo-Provera), the Nexplanon etonogestrel implant or the levonorgestrel intrauterine device.

“The Nexplanon is associated with more irregular breakthrough bleeding that you’ll want to discuss with your patients,” Dr. Huhmann said. “You also may need to supplement with the progesterone-only pill with that implant in order to get better menstrual suppression.”