Championing the use of pediatric simulations in medical training

Championing the use of pediatric simulations in medical training 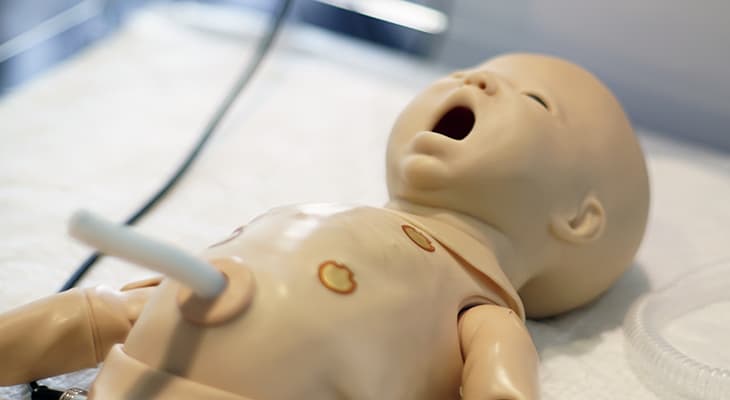 Pediatric simulation isn’t much different from the training that allowed airline pilot Chesley “Sully” Sullenberger make a successful emergency landing on the Hudson River after a bird strike caused engine failure on the passenger jet taking off from New York’s LaGuardia Airport.

The so-called “Miracle on the Hudson” was possible only because pilots train on unlikely scenarios using realistic flight simulators.

“In real life, you have only one chance to get it right,” said Aaron W. Calhoun, M.D., a pediatric critical care specialist with Norton Children’s Critical Care, affiliated with the UofL School of Medicine.

Dr. Calhoun is co-chair of INSPIRE, the International Network for Simulation-based Pediatric Innovation, Research & Education. The nonprofit organization has more than 1,000 members in 46 countries across the world. Dr. Calhoun also publishes frequently on the topic, including “Recommendations and Guidelines for the Use of Simulation to Address Structural Racism and Implicit Bias,” in Simulation in Healthcare, the primary journal in the field of medical simulation.

According to Dr. Calhoun, in addition to serving a valuable role in training, simulation provides an excellent source of data for research on such diverse topics as running codes to delivering stressful news to patients’ families. In 2019-2020, INSPIRE members published 142 peer-reviewed papers.

“I loved it. I got in on the ground floor and stuck with it ever since,” Dr. Calhoun said, joking that pediatric simulation is like playing Nintendo for the good of humanity.

In addition to INSPIRE, Dr. Calhoun also serves on the board of Society for Simulation in Healthcare and is an associate editor for Simulation in Healthcare. He is an attending physician in the “Just for Kids” Critical Care Center at Norton Children’s Hospital and is a tenured professor in the Department of Pediatrics at the University of Louisville School of Medicine.

From experimental to standard practice in medical education

The use of high-tech manikins for medical training dates back to the 1960s, when the University of Miami developed “Harvey,” to simulate cardiac conditions. Two decades later, Stanford University’s David Gaba, M.D., developed a high-fidelity manikin for anesthesia training. Pediatric simulators soon followed, according to Dr. Calhoun.

Use Norton EpicLink to quickly and easily refer a patient to Norton Children’s.

Once experimental in medical education, simulation is now a standard practice and will continue to grow, not only for students but as a means of refreshing the skills of physicians, nurses and health care teams, according to Dr. Calhoun. One INSPIRE program takes simulations on the road to rural hospitals, giving them training on caring for the type of sick pediatric patients they may only see a few times a year. The program also helps them better set up their emergency departments for pediatric patients, so they can be ready when they arrive.

Dr. Calhoun’s research has focused on ethical guidelines and safeguards when using “actors” in such simulations. The goal is to give the participant valuable education while protecting them from emotional harm, such as from simulated mistakes.

Amid the COVID-19 pandemic, tele-simulation took off and showed real potential in areas like complex diagnostics, according to Dr. Calhoun, who expects it to continue growing even once the pandemic abates.

Virtual reality is also an emerging tool for training. Experimental virtual reality simulations exist of pediatric patients in the emergency department decompensating with seizures along with other scenarios.

Dr. Calhoun said the real-world benefits of simulation are obvious to him every time he has a patient in cardiac arrest, something he trained for using a manikin.

“Those experiences shaped my reflexes in a way they wouldn’t have been shaped otherwise,” he said.