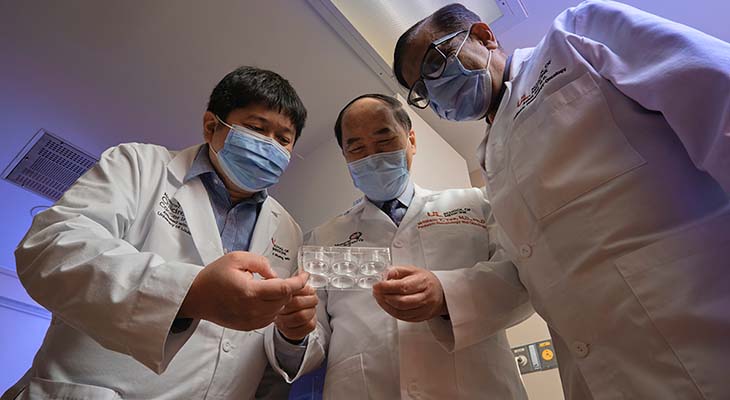 Tumors in the central nervous system (CNS) account for 20% of childhood cancers, with 5.65 cases and 0.72 deaths per 100,000 children under 14 in the United States. Brain tumors are second only to acute lymphoblastic leukemia in incidence.

While recent advances have resulted in greater life expectancy for some childhood CNS tumor patients, the outlook for others remains poor. Even successful treatments can have long-term morbidity.

Low-grade gliomas are the most common childhood CNS tumors, accounting for approximately a third of all cases. Unlike adult low-grade gliomas, they rarely transform into high-grade tumors. Five-year progression-free survival is just under 70% and overall survival is 95%.

The initial treatment of low-grade gliomas involves maximal safe resection. Cases that are completely resected generally are cured. However, total gross resection often is not possible, especially in tumors located deep in the midline. Fortunately, most of these tumors behave indolently. While radiotherapy is an effective option, chemotherapy often is used if tumors progress.

Low-grade gliomas are one of the success stories thus far for molecular targeted therapy for pediatric malignancies. Molecular alterations in the MAPK pathway are seen in 85% of these tumors. This pathway can be targeted by BRAF and MEK inhibitors, and ongoing trials are investigating the role for using these newer targeted agents up front, instead of chemotherapy.

High-grade gliomas represent 10% to 15% of childhood CNS tumors and have a dismal prognosis. Despite surgery and adjuvant chemotherapy, up to 90% of children will die within two years of diagnosis.

Standard treatment is focal radiation, but there has been no appreciable outcome improvement with the use of different chemotherapy strategies over the past five decades. The three-year progression-free survival and overall survival are 10% and 20%, respectively.

Thanks to advances in next-generation molecular sequencing, we now have a greater understanding of the driver mutations in pediatric high-grade gliomas. The majority of pediatric high-grade gliomas have mutations in the chromatin-remodeling histone H3 gene. Histones are proteins that serve as chaperones for DNA. Standard treatment is with local radiation and chemotherapy, but has shown limited efficacy. Targeted therapy options are being investigated but have thus far similarly not had a substantial effect.

Diffuse midline glioma is the most aggressive subtype and carries an extremely poor prognosis. Two-year survival is less than 10%, and median survival is approximately 10 months. There are no proven treatment options except palliative radiation therapy. Approximately 90% of these cases have an alteration in the histone H3K27. Several agents are currently under investigation.

Rarely, high-grade gliomas also can develop in infants and very young children under 3 years of age. These generally have improved outcomes compared with their older counterparts and often harbor targetable kinase gene fusions, including ALK, NTRK, ROS and MET.

Medulloblastoma is the most common malignant brain tumor in children. Approximately two-thirds of cases are diagnosed under age 10 years, and a third are seen in children younger than 3 years old. They generally arise from the cerebellum, and affected children present with issues with coordination and balance and/or symptoms related to hydrocephalus.

Children under 3 years old tend to fare worse. Other factors associated with poor outcome are disease spread at diagnosis, subtotal surgical resection with residual tumor larger than 1.5 square centimeters on postoperative imaging, and adverse molecular features. Prognosis can vary significantly based on these features. Cure can be achieved in standard-risk patients 80% of the time, while high-risk patients fare poorer.

To refer a patient to Norton Children’s Cancer Institute, visit Norton EpicLink to open an order for Pediatric Oncology.

Ependymomas are the third most common childhood CNS tumor (after gliomas and medulloblastomas), accounting for 5% to 10% of all cases. Approximately 90% are located in the brain, but ependymomas also can occur in the spine.

Initial treatment includes maximal safe resection, followed by radiation. To date, there is no identified role for chemotherapy in this group of tumors.

Despite advances in therapy, the long-term outcome for ependymomas remains guarded. Although we have been able to molecularly characterize ependymoma, further research is needed to elucidate molecular targets for these tumors.

The 10-year progression-free and overall survival for those that have undergone a complete surgical resection are approximately 55% and 70%, respectively.

Although molecular targeted therapies have had limited success in childhood CNS tumors, mainly in low-grade gliomas, future research will lead to newer, more effective targeted options. There are also ongoing trials investigating the role of immunotherapy, including chimeric antigen receptor T-cell (CAR-T) for these brain tumors.

Michael Angelo Huang, M.D., is a pediatric hematology/oncology and neuro-oncology specialist with Norton Children’s Cancer Institute, affiliated with the UofL School of Medicine.