Clubfoot treatment, including Ponseti method and heel cord lengthening, is available at the Norton Children’s Orthopedics of Louisville 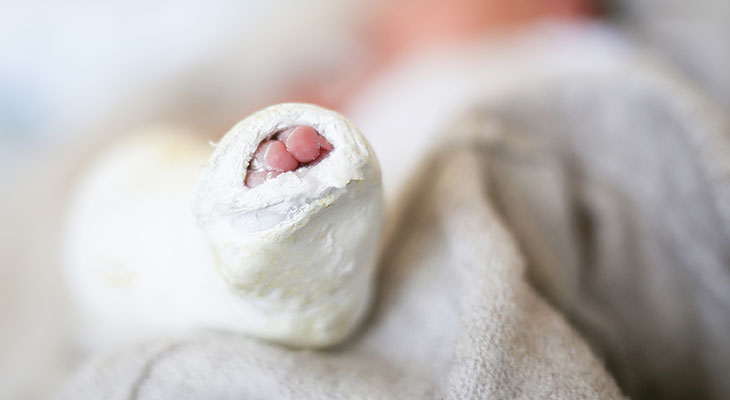 Clubfoot, sometimes referred to as club leg, affects roughly 1 out of 1,000 births. Clubfoot involves four primary deformities (midfoot cavus, forefoot adduction, hindfoot varus, and equinus contracture) that result in the ankle being stuck downward, the foot being turned inward or often pointing toward the other foot and hooked onto itself. In about 50% of cases, both feet area affected. Clubfoot management with a pediatric orthopedist gives children with clubfoot the opportunity to treat the deformities, with effective correction being achieved nearly 100% of the time. Norton Children’s Orthopedics of Louisville, affiliated with the UofL School of Medicine, offers a clinic dedicated to clubfoot treatment with a focus on early intervention and decreasing rates of recurrence.

In about 50% of cases, clubfoot is bilateral, meaning both feet are affected. To make a diagnosis of a clubfoot, no special imaging or blood tests are necessary — the diagnosis is made clinically by a thorough physical examination at birth.

Use Norton EpicLink to quickly and easily refer a patient to Norton Children’s Orthopedics of Louisville, affiliated with UofL School of Medicine

“More often than not, clubfoot is being presumptively diagnosed with perinatal ultrasounds,” said James E. Moyer, M.D., nonsurgical pediatric orthopedics physician with Norton Children’s Orthopedics of Louisville. “I offer perinatal consults to expectant parents to go over the potential treatment process and hopefully allay any misconceptions or fears about antepartum orthopedic care.”

Ideally, clubfoot treatment begins in the first month of life. The Ponseti casting method is considered the gold standard of care for children with clubfoot. The method involves a series of long leg plaster casts to passively stretch and slowly correct the deformities in a stepwise fashion. Ideally, the foot is ultimately corrected to a position of external rotation (of about 60 degrees) and dorsiflexion (of 15 to 20 degrees). The Ponseti method essentially has two main phases:

“Compliance with bracing is crucial for children with clubfoot,” Dr. Moyer said.

Without compliant bracing, recurrence of clubfoot in the first year is close to 90%, according to Dr. Moyer.

“In terms of idiopathic clubfeet, final correction with good flexibility is achieved the overwhelming majority of the time,” Dr. Moyer said. “The biggest challenge with clubfeet is maintaining the correction after it has been obtained. But with regular stretching and good compliance with the bracing protocol, the outcomes are, generally speaking, very good”