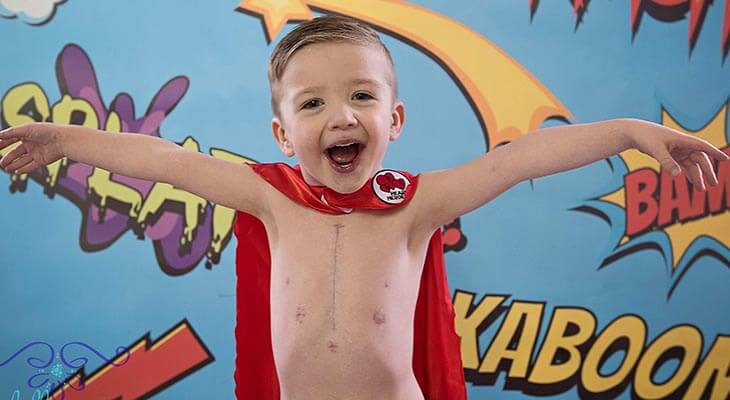 Audrey Sims’ first clue that her twins’ birth would be complicated came at 14 weeks of pregnancy, when a routine ultrasound found that one of her sons, Aiden, had a cystic hygroma, a fluid collection on the neck.

After an anatomy scan at 19 weeks and other tests, the Simses learned that Aiden had Ebstein anomaly, a major abnormality of one of the heart valves, as well as a hole in the heart called a ventricular septal defect. Audrey’s maternal-fetal medicine physician then connected her with  Brian J. Holland, M.D., pediatric cardiologist with Norton Children’s Heart Institute, affiliated with the University of Louisville. At 29 weeks, noncompaction cardiomyopathy, an abnormal thickening of the heart muscle, was detected as well.

Dr. Holland said Aiden’s case was presented at the Norton Children’s Fetal Board, which meets monthly and discusses potentially complicated cases. The Fetal Board includes high-risk OB/GYN physicians, newborn general and cardiac surgeons, and neonatologists. Together, they made a plan for Aiden.

When Aiden arrived, the team was ready

When Audrey gave birth on Dec. 21, 2014, at Norton Hospital, the children’s hospital — just across a pedway — was prepared.

To refer a patient to Norton Children’s Maternal-Fetal Medicine, use the online referral form.

“When she came in and delivered, we already had a team ready for what the heart conditions were,” Dr. Holland said.

“We can see a lot of details during pregnancy, but even more details about the structure after birth. Also, there are changes to the way the heart and circulation function after birth, so we were checking that as well,” Dr. Holland said.

Dr. Holland also requested a cardiac catheterization be performed on Aiden to measure blood flow directly. The goal was to see if he needed surgery right away. Because Aiden had only one pumping chamber, Dr. Holland needed to see if the blood flow to the lungs was properly balanced.

The cardiac catheterization gave direct measurements of pressure and blood flow in each of the areas of Aiden’s heart and blood vessels. The results showed that with the right treatments, Aiden could have a balanced circulation and did not need a shunt surgery as a newborn.

Most newborns have a blood oxygenation of 95 to 96 percent. Aiden’s ranged from 70 to 85 percent. Many patients with noncompaction cardiomyopathy have weak hearts. To be prepared for the worst case, Dr. Holland consulted with heart failure and transplant members of his team at Norton Children’s Heart Institute.

Fortunately, they were not needed.

“In the end, we decided medicine and observation was all that was needed as a newborn,” Dr. Holland said.

Throughout the trying days and months, Audrey said she appreciated the optimism and confidence from the Norton Children’s  Heart Institute team.

“He did well with that,” Dr. Austin said. “He still had ‘blue’ blood mixing inside his heart. We’ve learned patients who function with one pumping chamber benefit from staged procedures, with the final stage a Fontan operation.”

In October 2018, Aiden underwent Fontan surgery, which redirects deoxygenated blood coming from the lower body into the pulmonary arteries.

“We never make a major decision as a single doctor,” Dr. Austin said. “It’s rare that members of the team are at odds, but it makes sense when there is a life at risk to have more than one opinion. The result is the patient gets the best care.”

When the Sims family moved temporarily from Madison, Indiana, to San Diego, California, they felt such a strong connection to Dr. Holland that they flew back to Louisville every three months for follow-up appointments.

“I think one of the really nice things that has allowed us to provide the best possible care for this family is we have had an ongoing relationship since pregnancy,” Dr. Holland said.

Audrey said the family also became close with the NICU nurses, who come to the twins’ birthday parties.

The twins are now 4 years old and inseparable. Jaxon is more rambunctious, and Aiden is funny and sweet, Audrey said.

“Audrey and her husband, Andrew, are amazing,” Dr. Holland said. “They’ve been put in a situation no parent wants to be in and handled every step in a remarkable way.”

Meanwhile, Aiden has emerged from his surgeries and health challenges looking every bit like a typical 4-year-old.

“Watching him play with his brother, you’d never know his heart had only one pumping chamber,” Dr. Holland said.