The Food and Drug Administration has approved hybrid ablation for patients with long-standing persistent A-fib. 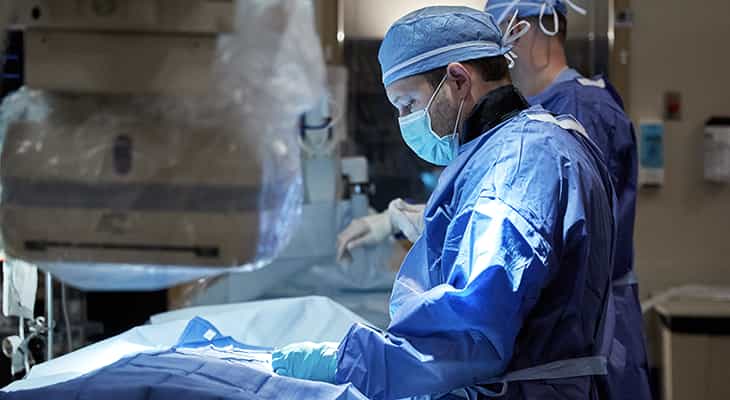 The Food & Drug Administration (FDA) has approved hybrid ablation as a treatment for long-standing persistent atrial fibrillation (A-fib), the most severe form of the condition affecting about 45% of A-fib patients.

The cardiac electrophysiologists and cardiothoracic surgeons at Norton Heart & Vascular Institute have been performing hybrid ablations longer than any other provider in the Louisville and Southern Indiana area.

Norton Heart & Vascular Institute’s experience with hybrid ablation ranks among the top 10 in the country in terms of volume, according to AtriCure the maker of the EPi-Sense ablation device that allows for the minimally invasive epicardial portion of the therapy.

Providers at Norton Heart & Vascular Institute contributed data on the procedure’s outcomes to the FDA as part of the most recent approval process.

Use Norton EpicLink to quickly and easily refer a patient to Norton Heart & Vascular Institute.

The FDA’s approval for use of the procedure in long-standing persistent A-fib cases means those who’ve had constant symptoms for more than a year are now candidates for this potentially life-changing procedure.

A-fib typically starts at the base of the pulmonary veins, on the posterior heart wall or in the left atrial appendage, and can cause symptoms such as palpitations, a fluttering feeling in the chest and arrhythmia.

Long-standing persistent A-fib can cause shortness of breath, dizziness, weakness, fatigue, low blood pressure and pain or pressure in the chest.

The first step in a hybrid ablation is a minimally invasive pericardioscopic epicardial ablation that applies radiofrequency energy to the posterior left atrial wall, distal from the esophagus. The aim is to create durable and contiguous lesions while reducing risk of injury to the adjacent heart structures.

The EPi-Sense device is cooled on the back side with saline solution to prevent injury to healthy tissue. On the underside, vacuum pressure pulls heart tissue into the radiofrequency coil while perfusion conducts energy downward into tissue while circulating blood absorbs excess heat.

The second stage is an endocardial ablation that uses mapping and ablation to target the regions that need additional treatment and any areas impeded by pericardial reflections during the epicardial part of the treatment. This part of the procedure is a conventional cardiac ablation achieved with a catheter.

A study of 153 patients at 27 centers found that compared with endocardial ablation alone: