In many ways, early onset scoliosis is an opposite of idiopathic scoliosis

In many ways, early onset scoliosis is an opposite of idiopathic scoliosis

Early onset scoliosis is very different from adolescent idiopathic scoliosis — almost the opposite in many respects, according to Joshua W. Meier, M.D., pediatric orthopedic surgeon with Norton Children’s Orthopedics of Louisville, affiliated with the UofL School of Medicine. 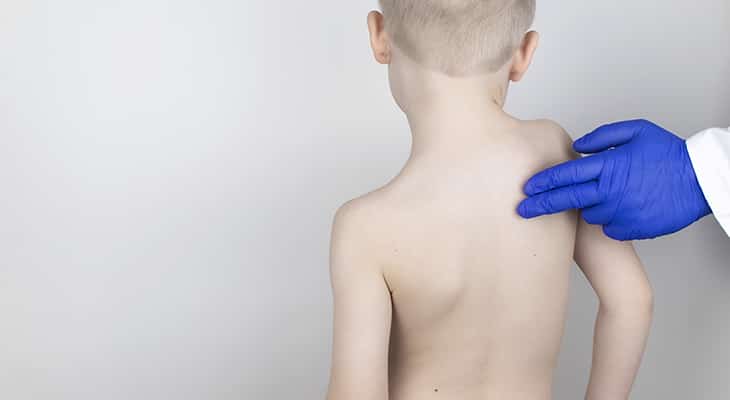 Early onset scoliosis is very different from adolescent idiopathic scoliosis — almost the opposite in many respects, according to Joshua W. Meier, M.D., pediatric orthopedic surgeon with Norton Children’s Orthopedics of Louisville, affiliated with the UofL School of Medicine.

Adolescent idiopathic scoliosis doesn’t develop until after age 10 or so.

“Usually, these kids that you see, say at 11 or 12, that have curvature, did not have curvature when they were 6 years old. It’s not something that was not picked up — they just didn’t have it,” Dr. Meier said during a recent continuing medical education opportunity.

“This has a lot of opposites from adolescent idiopathic scoliosis, which is much more common in females. It’s usually a right thoracic curve, which is by far the most common pattern, is highly likely to progress with age and growth, and spontaneous resolution is extremely rare,” Dr. Meier said.

Clinical signs of early onset scoliosis include a rib hump revealing a significant rotational deformity, elevated shoulder and trunk shift. It can be confused with torticollis, which is typically a muscular condition that resolves with time, physical therapy and stretching exercises. Shoulder blade asymmetry can be confused with Sprengel’s deformity, which is caused by the scapula’s failure to descend during fetal development.

Children with early onset scoliosis can sometimes grow out of it. With a curve of up to about 25 degrees or so, usually monitoring the condition for months or a year will show the curve straightening especially in younger children (under the age of 5).

Use Norton EpicLink to quickly and easily refer a patient to Norton Children’s Orthopedics of Louisville.

If the curve is large or progresses, the curve is likely to get worse with growth and interfere with pulmonary development, according to Dr. Meier. Bracing can control the curve during growth, but is rarely curative.

“You get variable compliance with these. You can imagine trying to make a 5-year-old wear a plastic brace,” Dr. Meier said. “I try to sell it as body armor, so if kids like Iron Man, you can make it sound pretty cool so that they’ll wear this brace, at least for a while.”

Casting of course enhances compliance and can be applied with a technique pioneered by Min H. Mehta, M.D., that applies traction, derotation and molding to help the scoliosis improve.

“We have a special table at Norton Children’s Hospital that allows us to put the child in a little bit of mild traction and apply a plaster cast with some stretching, derotation and a mold to help control the spine,” Dr. Meier said. “Sometimes, you can go over the shoulders, but most of the time, we go from armpit to just above the pelvis with belly and chest cut-outs to allow room to breathe and eat while controlling the ribs and the trunk.”

Ideally, the child would be casted for six to 12 months. While that is an aggressive strategy, it may be more realistic to take a “cast holiday” every two or three months, which can stretch out the casting time 1 to 3 years. If started early enough, casting can straighten the spine.

But after three years or so of on-and-off casting, a family’s patience with casting can run out and they decide they can’t do it anymore. Usually at this point, the curve will have been decreased if not straightened entirely.

Spinal fusion at this point is not an option for children whose lungs are still developing — up to about age 10 — because early fusion surgery can inhibit pulmonary function.

Growing rods are a technique in which rods are attached to the top and bottom of the curve and control the curve while allowing growth. Growing rods are inserted through the muscle along the spine without touching the bone. Drawbacks include adjustments every six months or so that require general anesthesia and repeated X-rays.

Newer solutions include spinal stapling, spinal tethering or magnetically controlled rods to minimize the amount of surgery children need as they grow.