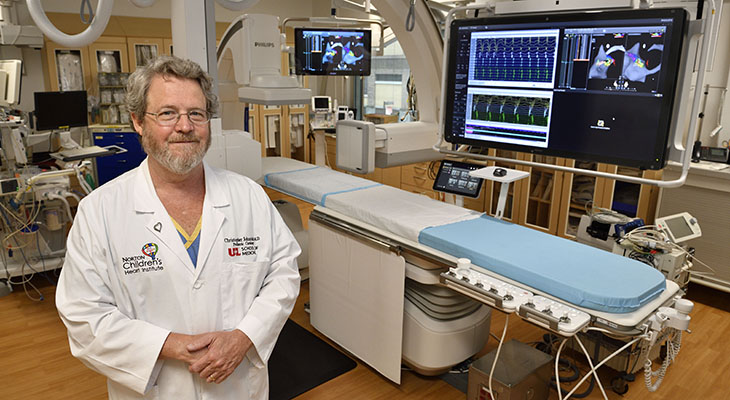 This is a condensed version of “One Family’s Clinical Odyssey From Evolving Phenotypic and Genotypic Knowledge of Catecholaminergic Polymorphic Ventricular Tachycardia and Long QT Syndrome,” which is open access and available to read in full here.

Life-threatening arrhythmias in apparently healthy individuals can be due to diverse heritable cardiac channelopathies. Ongoing advances revealing the underlying pathophysiology and genotype-phenotype associations are constantly evolving our approaches to diagnosis and management of these clinical entities.

In some cases, initial diagnoses prove inaccurate over time, so routine reevaluation of each patient and family member remains an important element of care, with potentially life-altering ramifications.

To refer a patient to Norton Children’s Heart Institute, visit Norton EpicLink and open an order for pediatric cardiology.

At that time, the rare variant was considered pathogenic, prompting family cascade screening. However, a recent large multicenter study demonstrated most KCNE1 variants were weakly penetrant and overrepresented in control populations.

Contemporary genetic testing of the proband identified a variant of uncertain significance (VUS) in RyR2, a more plausible explanation for her phenotype. Cascade screening for RyR2-related catecholaminergic polymorphic ventricular tachycardia (CPVT) ensued, and the long-standing familial diagnosis of LQT5 was reversed.

In 2001, the 13-year-old proband presented with syncope triggered by exertion, anxiety and startle. She was otherwise healthy, without significant personal or family medical history. Her physical examination and echocardiogram were normal, and electrocardiogram (ECG) showed sinus rhythm with a normal corrected QT interval of 413 milliseconds (ms). Treadmill testing revealed progressively frequent premature ventricular contractions (PVCs), bidirectional couplets and polymorphic triplets, resolving with rest. The QTc was 430 ms and 437 ms in recovery at one and four minutes, respectively. She was given the clinical diagnosis of CPVT and treated with propranolol. Follow-up Holter monitoring recorded sinus rhythm, rare premature atrial contractions and no ventricular ectopy. The family requested an implantable cardioverter-defibrillator (ICD), as medications might not be protective.

In 2002, genetic testing via a research laboratory identified a rare heterozygous KCNE1 variant (p.Asp76Asn). The full list of genes screened was unavailable; often only limited RYR2 exons were tested by research laboratories at that time. Although her presentation was consistent with CPVT, clinical overlap seemed plausible given limited insight into the LQT5 phenotype; the clinical diagnosis was then revised to LQT5. Management included propranolol, long QT syndrome precautions, and regular clinic visits and device interrogations. Follow-up QTc values ranged from 393 to 452 ms. She did well for four years until her first appropriate ICD shock for polymorphic ventricular tachycardia (PMVT) during moderate physical activity and uncertain medical compliance. Over the next seven years, she experienced a few more shocks, especially during periods of medication noncompliance. Fortunately, she has since done well with no recurrences, bringing three pregnancies to term uneventfully.

After initial identification of the KCNE1 variant in the proband, cascade family screening included testing for this variant, symptom-event histories and ECGs. At that time, all KCNE1-positive relatives had been asymptomatic, and were managed empirically per routine long QT syndrome protocols. In 2017, the proband underwent comprehensive commercial genetic testing, confirming the KCNE1 variant but also revealing she was heterozygous for a VUS in the RYR2 gene (p.Lys3997Glu). This finding was compelling given her initial presentation; we suspected the RYR2 variant may indeed be the culprit for her arrhythmias. Subsequent cascade screening for the RYR2 variant was positive in two family members, also having the CPVT phenotype. The remaining family members only having the comparatively benign LQT5 have remained asymptomatic and are being followed conservatively, avoiding medications contraindicated in LQTS but no longer on chronic beta blocker therapy.

This 20-year experience with a family whose proband presented with syncope and malignant arrhythmias, early on considered to reflect a rare subtype of long QT syndrome after initial genetic testing but later confirmed to be due to CPVT, highlights that providers managing patients with known or suspected inherited arrhythmias should focus primarily on phenotype and consistently reassess contemporary genotype-phenotype correlations to ensure all family members have accurate diagnoses.

Intermittent reevaluation of family members initially unaffected by the primary genetic variant may be a reasonable practice. Finally, it is proposed that this RYR2 VUS (p.Lys3997Glu) be promoted to likely pathogenic for CPVT, supported by patient phenotypes and the variant’s location in a genetic “hot spot.”

Christopher L. Johnsrude, M.D., is a pediatric cardiologist and serves as director of the pediatric and adult congenital cardiology arrhythmia service for Norton Children’s Heart Institute, affiliated with the UofL School of Medicine.