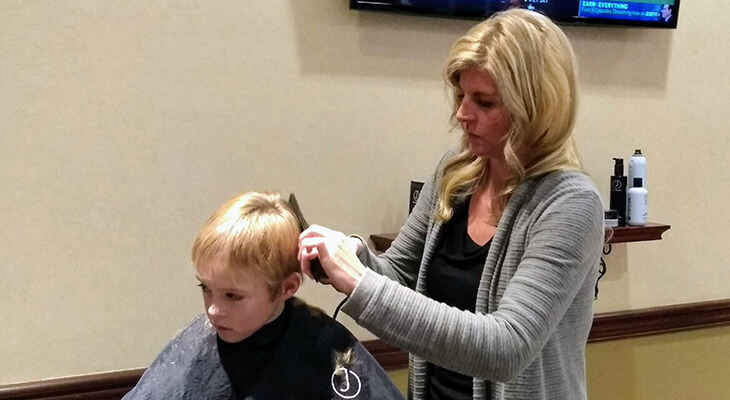 In 2010, Heather Ritchey had a seizure. It came out of nowhere, and she didn’t have another one for two years. Unfortunately, when the next one hit, she was behind the wheel of her car. It’s the last time she’s driven.

“I crashed the car,” she said. “I don’t remember any of it. So lucky that no one was seriously hurt.”

The seizures, meanwhile, started to intensify. Before long, Heather was seizing several times a week. It was impacting her life, especially at work.

In 2013, Heather became a patient of Norton Neuroscience Institute. Doctors diagnosed her with epilepsy and multiple sclerosis (MS). While medications were handling the MS, they weren’t as effective in treating the seizures.

“The medications would work OK for a while, but then the seizures would resume,” said Rebekah J. Woods, D.O., neurologist with Norton Neuroscience Institute. “Heather was even having seizures she couldn’t feel — sometimes hourly.”

To make matters worse, Heather’s seizures were in the hippocampus, the area of the brain responsible for memory. Heather’s memory would likely deteriorate if the seizures continued to worsen. The location also made it impossible to surgically remove the lesion.

“My life was turning upside down,” Heather said. “I had to stop working, didn’t want to go out, couldn’t drive — it was depressing.”

BECOMING A CANDIDATE FOR A NEUROSTIMULATOR

Dr. Woods and David A. Sun, M.D., Ph.D., neurosurgeon with Norton Neuroscience Institute, presented Heather with another option. An innovative technology, known as the NeuroPace Responsive Neurostimulation System, had recently hit the market. NeuroPace is similar to a heart pacemaker, but for the brain. The device is attached to the skull with electrodes implanted in and around the lesion. The system, which is hidden under the skin, constantly monitors for seizures and interrupts them without the patient feeling a thing.

Heather was an ideal candidate for Norton Healthcare’s first NeuroPace implant, but she had concerns.

“I initially said no,” she said. “The thought of brain surgery terrified me.”

But she slowly came around to the idea.

“Dr. Sun and Dr. Woods talked to me about all my options and answered every question,” she said. “I came to realize this was my best option to fight the seizures and keep my memory intact.”

In January 2018, Dr. Sun implanted Heather’s NeuroPace device at Norton Brownsboro Hospital. She was home the next day.

“It didn’t feel like I’d had brain surgery,” she said. “Just waiting for the hair on that spot to grow out.”

Several weeks after the procedure, Dr. Woods turned on Heather’s device. The results were almost immediate.

“I’ve seen a dramatic reduction in my seizures,” Heather said. “It’s like I’m a different person.”

NeuroPace also serves as a monitoring device. Every night, Heather scans her head using a wand connected to a special laptop. That computer sends information back to Dr. Woods, which allows her to adjust the device.

“We’re still fine-tuning Heather’s device,” Dr. Woods said. “We also can use the data to see if we need to make medication changes.”

A RENEWED OUTLOOK ON LIFE

Heather is feeling better about life. She’s going out with friends and finding her confidence again. She even hopes to start driving at some point.

“It’s been five years since I’ve been to the store by myself,” she said. “It would just be an adventure to walk around Target on my own.”

Despite the rollercoaster of the past eight years, Heather is grateful for the care she’s received and her decision to go with NeuroPace.

“Dr. Woods and Dr. Sun have been great to me,” she said. “They have my best interest at heart and want me to live my best life possible. I fully intend to do just that.”

To refer a patient to Norton Neuroscience Institute, click here.