Single ventricle anomalies: What your patients’ families can expect

Single ventricle anomalies: What your patients’ families can expect 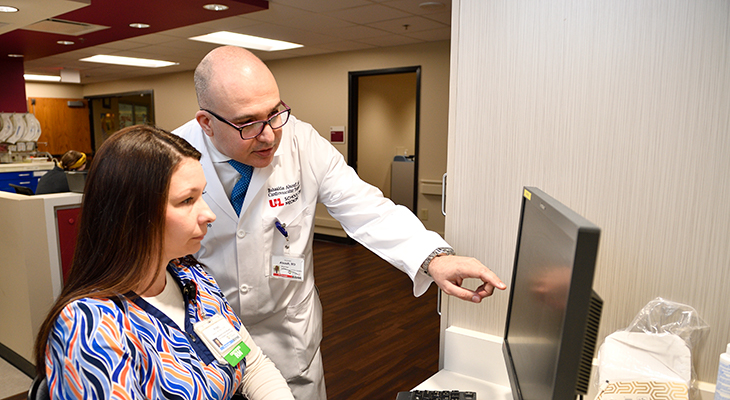 Single ventricle anomalies account for more than 10% of congenital heart defects. Each defect poses a complex surgical and medical challenge, with the initial surgery tailored to the specific anatomy and physiology, according to Bahaaldin Alsoufi, M.D., chief of pediatric cardiothoracic surgery and co-director of Norton Children’s Heart Institute, affiliated with the UofL School of Medicine.

“Some of them have dominant left ventricles; some of them have dominant right ventricles. The degree of pulmonary blood flow also varies among patients; some have unrestricted pulmonary blood flow, while others have pulmonary valve stenosis that can often be very severe,” Dr. Alsoufi said during the “Understanding and Managing Single Ventricle Congenital Cardiac Anomalies” continuing medical education (CME) program, currently available on demand at NortonCME.com.

Though the operations differ, according to Dr. Alsoufi, the goals are the same: providing unobstructed systemic outflow to the aorta, unobstructed pulmonic venous return, and a stable source of blood to the pulmonary arteries, without excessive pulmonic blood flow.

With hypoplastic left heart syndrome, the most common single ventricle anomaly, the left ventricle, mitral and aortic valves and ascending aorta are very small. Typically, these children require three surgeries, a Norwood procedure, followed by a Glenn shunt at 4 or 5 months and finally a Fontan procedure at around 3 years of age.

In a Norwood procedure for hypoplastic left heart syndrome, usually performed during the first week of life, the right ventricle is the systemic ventricle, so the pulmonary artery is connected to the aorta, while a Blalock-Taussig (BT) shunt or RVPA Sano shunt provides pulmonary blood flow.

When babies with single ventricle anomalies are discharged after the first procedure, there is an interstage mortality risk before the second stage operation, historically 10% to 15%, Dr. Alsoufi said in the presentation. The most common reasons for this interstage mortality include shunt thrombosis or coronary steal syndrome, and arrythmias. However, there are some noncardiac issues that have been identified, such as aspiration, dehydration, infection, or end organ complications, that also can contribute to this interstage mortality, according to Dr. Alsoufi.

Preparing families to care for these children is extremely important, according to Dr. Alsoufi.

“We rely on extensive family education, and when needed, we arrange for home nursing. We have a single ventricle team that is watching out for those patients on a 24/7 basis. The family has a hotline. They can always reach this team. The team also will have proactively scheduled calls to the family on a routine basis,” Dr. Alsoufi said.

Norton Children’s Hospital also has a very low threshold to admit these patients, schedules close follow-up and imaging visits to the clinic, and schedules the catheterization lab before discharge, according to Dr. Alsoufi.

In addition, families will start receiving an iPad where they enter data so the team at Norton Children’s Heart Institute is able to continuously monitor what’s going on and look at any trends and changes. This enables the team to detect any concerning deviations from expected values and that would trigger an earlier office visit or admission as deemed necessary. All of those would allow early detection and management of any issues, and that has proved to be extremely beneficial in lowering the risk of interstage mortality substantially.

The second stage is typically the Glenn shunt, with the goal of getting rid of parallel circulation, where the lungs and the body are competing for their share of blood.

The goal of the third stage, the Fontan procedure, is to increase pulmonic blood flow because it’s only coming from the superior vena cava. As the head-to-body ratio decreases, the blood supply to the lungs is going to decrease, and the patient becomes cyanotic. With the Fontan, the superior vena cava and inferior vena cava both drain to the pulmonary artery into lungs. The blood flows to the heart from the lungs via the pulmonary veins, and the heart pumps it to the body. This way, the circulation is “in series,” which is similar to the normal circulation, minus the right-sided pump, of course.

“We can actually achieve normal saturation after the Fontan operation,” Dr. Alsoufi said. “However, the Fontan is not the end of the road.”

In the years following the Fontan, there is a higher cumulative hazard of complications, including sudden death, heart failure and thromboembolism; and some patients who experience these complications due to “Fontan failure” might require evaluation for heart transplantation.

According to Dr. Alsoufi, the reason for this is the one ventricle has to eject against both systemic and pulmonic vascular resistance, resulting in a continuous afterload on the dominant ventricle and a chronic state of low cardiac output and high central venous pressure (CVP). This can contribute to liver dysfunction and other organ congestion.

One extremely difficult issue to address is protein-losing enteropathy (PLE), which happens in about 3% to 15% of patients after Fontan. Half of patients die within seven years of diagnosis of PLE.

“While there are numerous medical and interventional procedures that can be applied in patients with PLE, the only thing that consistently improves PLE is heart transplantation,” Dr. Alsoufi said.