Diagnosed with aortic valve disease and aortic stenosis as a child, he needed surgery earlier than most. Learn about the exciting new surgery technique that has him looking forward to a return to the stage. 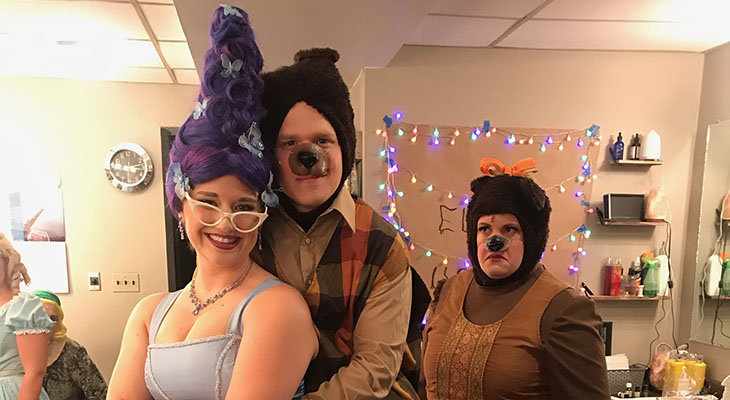 In the theater world, there are two basic rules: Don’t say “Macbeth” in a theater, and the show must go on. But what if you’ve gone in for your annual heart checkup and learned you need an aortic valve surgery to treat aortic regurgitation? It was a reality that 27-year-old Clayton Bliss found himself in while cast as Papa Bear in “Shrek the Musical” at Derby Dinner Playhouse. Almost a year after surgery, Clayton is feeling better than he ever has.

According to Clayton, when he was 6 or 7 years old, his pediatrician heard a heart murmur and referred him to a pediatric cardiologist. His two official diagnoses were mild-to-moderate aortic regurgitation, a form of aortic valve disease, with mild aortic stenosis.

“The first cardiologist we met told me I’d never be able to play any sports and that I would just have to basically take it easy, which we were pretty devastated to hear. My mother, father and I still remember the trip to that doctor,” Clayton said. “We were just scared because I never had any symptoms or anything, and here we are being told by somebody that I’m never going to be able to play basketball or run or do anything like that. So, we decided to go get a second opinion.”

“Dr. Arensman said, ‘You’re going to be fine. You can play any of those sports you want,” Clayton said. “I remember he always told me to not try to push down any buildings, always with a smile, always with a kind heart.” This new outlook gave Clayton and his family a huge relief, and was able to focus on what mattered most, being an active, healthy and worry-free kid.

Clayton was evaluated every year with tests including an electrocardiogram (EKG) and echocardiogram. Over the years, his cardiologist noticed the heart’s left ventricle was enlarging due to aortic regurgitation. It was at his annual heart checkup in late July 2019 that he learned that his aortic valve regurgitation and left ventricle enlargement were severe enough to require surgery.

Clayton met Bahaaldin Alsoufi, M.D., chief of pediatric cardiovascular surgery with Norton Children’s Heart Institute, affiliated with the UofL School of Medicine. Dr. Alsoufi and team presented Clayton with options for surgery. He could have an aortic valve replacement with a mechanical valve, animal valve or the Ross procedure (a complex operation when the surgeons transfer the patient’s own pulmonary valve to the aortic position). He also was given the option of a newer, innovative aortic valve repair technique with a medical device invented by cardiovascular surgeon J. Scott Rankin, M.D. The device, HAART 200 Aortic Annuloplasty Device, was approved by the U.S. Food and Drug Administration in 2017.

“Since I was a candidate for this new treatment, I figured why not,” Clayton said. “The thing that sold it for me is you can never do better than your natural-born tissue. Replacing my aortic valve would work well for a certain amount of time, but there is no option that is superior to your own valve, so that’s why I went with this particular procedure to repair and preserve my own valve. The other options would have required multiple surgeries, medications and restrictions, and I wanted to avoid that if possible.”

Clayton’s cardiologist had prepared him for the fact that he may need surgery one day, but the experience came on quickly and unexpectedly. He was in the middle of his run in “Shrek” when he learned his heart condition had progressed to the point that he needed to step down from his role, as much as it pained him as an actor.

“The show must go on,” Clayton said. “I was told standard protocol is that you stop all activity until you have the surgery. I’m up on stage every single night eight shows a week, sometimes twice a day, being physically active. It’s full-on cardio workouts and I’m wearing a bear suit; so I’m hot. I’m sweaty. I’m exerting myself.”

Clayton performed a few shows after learning he’d need surgery, but ultimately decided the show would go on without him.

“It was a tough battle to say even though the risk is low, I could potentially have a heart attack or do irreparable damage to my heart,” Clayton said. “But I had to make the call to my director

and let him know that I wasn’t comfortable going on. I had a lot of anxiety, worry and panic

during that time, a lot was at stake. The last thing I wanted to do was leave my castmates

behind in such a fun show. Fortunately, Derby Dinner is a very special place, full of wonderful

He assisted another actor to learn his role in just a few days and was able to watch the show in the audience a few times before the surgery. That’s something that actors never get to do, unless they get hurt and can’t do the show. Clayton said that he will never forget how quickly his Derby Dinner Playhouse family came to his aid, and how much love they showed him before and after his surgery.

Aortic valve repair with his own tissue, thanks to newer medical device and procedure

“I just consider myself lucky in a lot of ways,” Clayton said. “I consider myself very lucky to have had such an incredible cardiologist, surgeon and team of surgeons that oversaw my procedure. I’m lucky this device was invented by the time I needed surgery. I’m lucky I live right across the river in Southern Indiana from one of the best cardiovascular hospitals in the United States in Norton Children’s Hospital.”

Since his surgery, Clayton feels liberated physically, with new confidence about his health. While he hasn’t returned to the stage yet, he’s looking forward to the next show he’s able to do.

“I feel better than I ever did,” he said. “I’m not on any medication, except for a baby aspirin. At my last checkup, they weren’t able to detect any leaks. I’m hoping that remains the same for many years ahead.”