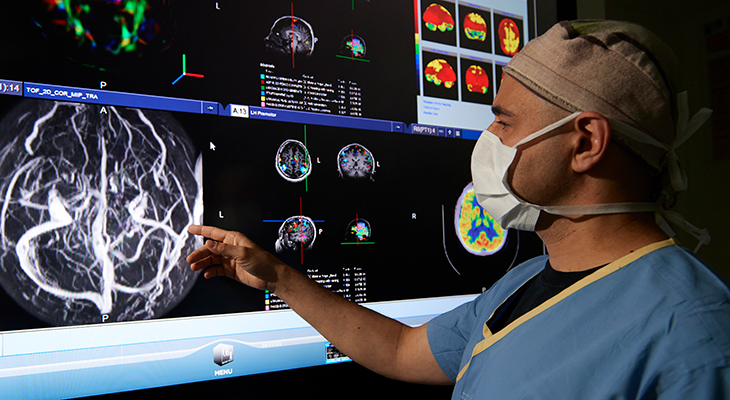 The choices parents have to face when considering elective brain surgery to treat refractory epilepsy can be overwhelming.

Pediatric neurosurgeon Ian S. Mutchnick, M.D. M.S., and the refractory epilepsy team at Norton Children’s Neuroscience Institute, affiliated with the UofL School of Medicine, give patients and families clear, visually intuitive information about the patient’s epilepsy and how they arrived at a surgical plan. When patients come to Norton Children’s Neuroscience Institute with refractory epilepsy, this information forms the basis of a shared approach to good decision-making.

“Decision-making — good decision-making — is the very heart of the patient experience,” Dr. Mutchnick said. “Helping people understand what is at stake and allowing them to apply their own perspectives and values to a difficult decision is one of the most important things I do.”

The pediatric epilepsy team uses detailed 3D images generated by its new Surgical Theater tool as part of a detailed, clear packet sent to families. The packet outlines what the plan is and why the surgeons arrived at that plan. The packet makes clear what to expect in surgery and carefully describes the potential risks and benefits.

“We want families to have all the time they need to read through the packet before they meet with us,” Dr. Mutchnick said.

Prior to medical school, Dr. Mutchnick spent two years studying decision-making at Stanford University in California. There, he worked with decision-making professionals who helped create the consultation planning process that has been pioneered for breast cancer patients at University of California San Francisco Medical Center as part of its patient decision services. The model has become increasingly popular.

Since patients typically leave a doctor’s appointment retaining about 30% of the information they heard, advance preparation is critical. By giving families detailed and clear information before they come to the appointment, using the same information during the office appointment and then having them leave with notes, Dr. Mutchnick hopes their understanding is much greater.

“When you respect how important it is for families to bring their own values and understanding to the information, you come out with better decision-making,” Dr. Mutchnick said. “Sadly, you don’t get to pick an outcome. But you can approach a difficult decision with risky alternatives in a way that leaves you with a sense of peace and serenity.”

Dr. Mutchnick views the decision-making process as a collaboration with patients and their families.

“While the epilepsy team may have strong opinions about the benefits of the treatment we propose, these are most often elective surgeries. It is usually OK to decline to proceed and continue with medical management.” Dr. Mutchnick said. “If they walk out of my office saying ‘no thank you,’ I respect that.”

Parents also can use the packet to get a second opinion. Dr. Mutchnick welcomes patients and families seeking the opinion of another epilepsy service.

When families come to his office to discuss the surgery, children and families can put on virtual reality (VR) goggles and “fly” through a 3D, digital version of the patient’s brain, giving them a perspective impossible only a few years ago. 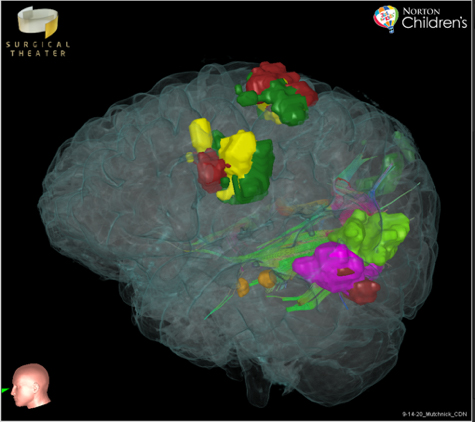 The year-old Surgical Theater technology has revolutionized the way families receive information. For epilepsy surgery at Norton Children’s Neuroscience Institute, the new technology also has been a game changer. With the 3D model, epilepsy can be surgically targeted as never before, giving the procedure a better chance of reducing or eliminating seizures.

With Surgical Theater’s VR, neurosurgeons also can simulate a procedure and practice before ever stepping into the operating room. Norton Children’s Neuroscience Institute is first in the region to use this new technology.

Surgical Theater is a cutting-edge system which does two important things. First, it brings many different analytical tools into the same visual environment, allowing research-grade neuroscience tools to be used in the clinical setting. Then, using powerful software, it converts hundreds of 2D radiographic images — computed tomography (CT), magnetic resonance imaging (MRI), magnetoencephalography (MEG) and nuclear medicine — into 3D models that allow for a much more intuitive understanding of the complicated relationships that are important to making good decisions in epilepsy.

Successful epilepsy surgery has to target the right area of the brain, the spot that is the source of the patient’s seizures. According to Dr. Mutchnick , this can have risks.

“Have we found the right target? If we remove that area of brain, hoping that seizures will be improved, what kinds of deficits might the child be left with?”

The level of risk depends on where in the brain the seizures begin.

“I want to do everything I can to help parents to clearly weigh the potential loss of neurological function with the potential for a meaningful reduction — or possible freedom from — seizures,” Dr. Mutchnick said.