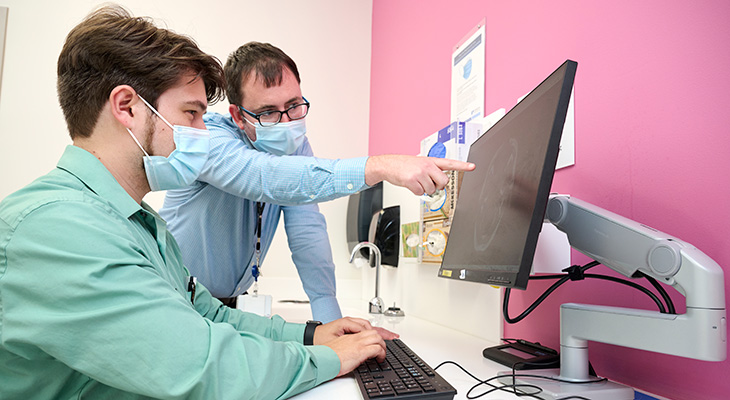 Tic disorders are the most common pediatric movement disorders and can be divided into motor tics and phonic or vocal tics. They tend to peak between the ages of 8 and 12 and are much more common in boys than girls.

By definition, tics wax and wane. They will change and look different over time.

“You often will get a mix of new and old tics,” said Christopher R. Barton, M.D., pediatric neurologist with Norton Children’s Neuroscience Institute, affiliated with the UofL School of Medicine. The Tics and Tourette Clinic offers specialty multidisciplinary care for children.

Tics can become much worse with stress, anxiety, excitement, anger and infection. Tics also tend to get worse during periods of change.

Motor tics include blinking, head-shaking, grimacing, tapping or even hitting.

Phonic or vocal tics range from sniffing, coughing and throat-clearing to less common ones such as coprolalia, or “cussing tics,” which occur in 2% to 5% of pediatric patients with Tourette syndrome.

Tics are preceded by an urge or a sensation, which children often can articulate beginning about age 8 or 9.

One recent phenomenon dubbed “TikTok tics” falls under the category of a functional tic disorder. These are patients with very rapid-onset, hard-to-control tics that have been linked to exposure to social media.

“I’ve actually often recommended a social media fast, so getting off Twitch or TikTok for two weeks, and symptoms may improve dramatically,” Dr. Barton said.

When tics have lasted for a year, a child can be diagnosed with Tourette syndrome. Tourette syndrome is defined as two or more motor tics and at least one vocal tic with no tic-free periods lasting three months. To meet the criteria, the tics also must begin before age 18.

According to the scientific literature, 86% of patients with Tourette syndrome have at least one comorbidity. Attention-deficit/hyperactivity disorder (ADHD) is extremely common. Others include learning disabilities, speech delay, obsessive-compulsive disorder (OCD), anxiety, bullying, rage attacks, sleep issues and handwriting difficulties.

“I like to tell parents that the top of the iceberg, the vocal and motor tics, are why kids come to see me, but it’s all the stuff under the iceberg that causes kids the most issues,” Dr. Barton said.

Studies have shown that stimulants used to treat ADHD do not cause tics but can unmask them in the short term before lessening symptoms.

Based on the data, methylphenidate may be a little better than dextroamphetamine derivatives, but if side effects or tics happen with one ADHD medication, clinicians can switch to another class of stimulants or nonstimulant ADHD medication, according to Dr. Barton. Alpha 2 agonists, which are off-label, are particularly effective in patients with comorbid ADHD, according to Dr. Barton.

The only treatment most children may need for tics is education and watchful waiting. The focus of treatment should be to identify and address the most severe comorbid condition, which often will make the tic much better.

“I often try to only treat tics that are functionally disabling and not remedied by different interventions,” Dr. Barton said.

These can be loss of self-esteem, peer issues, difficulty participating in schoolwork, or if it’s causing pain. The goal is not to make tics go away but to see that they don’t affect quality of life.

The American Academy of Neurology guidelines on Tourette syndrome state that the evidence best supports a treatment called comprehensive behavioral intervention for tics, or CBIT, which is a combination of cognitive behavioral therapy and habit-reversal therapy and often can be first-line treatment.

Because tics are preceded by an urge, an occupational therapist as part of CBIT may teach a child with a coughing tic, for example, to put their tongue on the roof of their mouth and make a circle for five seconds, according to Dr. Barton. This is called a competing response and over time may fill the urge without doing something disruptive.

Pediatric movement disorders other than tics or Tourette syndrome

OCD can look like tics but involve a complex obsessive thought and a compulsion to act on that obsession, rather than a sensory feeling. Stereotypies, or repetitive movements or sounds, are another mimicker of tics. Unlike tics, these are fixed, do not change and occur in a burst, often in a period of engrossment, and they also tend to start at an earlier age, typically under age 2, according to Dr. Barton.

Chorea is a pediatric movement disorder characterized by random-appearing, flowing movements that go from one area to another and can often worsen when a child wants to move or act. Chorea can be primary and secondary.

Primary chorea is a very slight physiologic chorea that isn’t harmful and is not going to cause functional impairment. It often runs in families and can be associated with thyroid disorder or a neonatal respiratory distress syndrome.

To refer a patient to Norton Children’s Neuroscience Institute, visit Norton EpicLink and open an order for Pediatric Neurology.

Drug or medication exposures can cause acute choreas. These patients need to be seen urgently, according to Dr. Barton.

Myoclonus, or physiologic myoclonus, describes very quick muscle jerks or contractions. With myoclonus, epilepsy needs to be ruled out first. Myoclonus is also associated with autoimmune disorders, medications and injuries to the brain. Unlike tics, there is no urge preceding myoclonic jerks, and they cannot be suppressed.

Tremors can be categorized based on when they happen: rest, action, posture, intention or task-specific.

Rest tremors are never normal in children and need to be treated as medication-induced, often from dopamine blockers, unless proven otherwise, according to Dr. Barton. Action or kinetic tremors and posture tremors are normal and not red flags.

“What is abnormal is a tremor that’s worse with intention,” Dr. Barton said.

An intention tremor worsens when a child moves. These children need to be evaluated. Task-specific tremors are also a cause for concern.