Neuromodulation uses stimulus such as electrical stimulation to block seizures, reduce their severity or frequency, or stop them as they are about to happen. 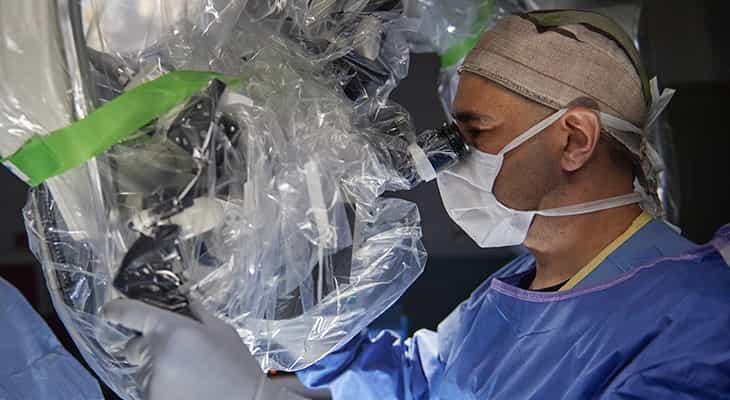 For two-thirds of children with epilepsy, medications are effective at reducing seizures. After trying two or more anti-seizure medications without success, the remaining one-third have medically refractory epilepsy.

For these children, surgery, a ketogenic diet or implantation of a neuromodulation device are options. Determining which of these is best for a particular child requires a detailed evaluation at Norton Children’s Neuroscience Institute, affiliated with the UofL School of Medicine. A key part of this evaluation often will include the implantation of electrodes directly into the brain in order to better understand where the patient’s seizures originate. To do this, pediatric neurosurgeon Ian S. Mutchnick, M.D., uses a hyper-accurate, 3D printed frame, which gets mounted to the patient’s head and guides each electrode to the exact right spot. Sometimes, instead of a frame, a precision-guided robot assists with the targeting.

Patients with implanted electrodes are monitored in the pediatric intensive care unit, sometimes for a few weeks. Once the origin of the seizures is determined, the best strategy for helping with the seizures can be determined.

“Neuromodulation is the alteration of nerve activity through targeted delivery of a stimulus, such as electrical stimulation,” Dr. Mutchnick, director of pediatric restorative neuroscience at Norton Children’s Neuroscience Institute, said during a recent continuing medical education presentation.

The stimulus is designed to block seizures, reduce their severity or frequency, or stop them as they are about to happen. The three main types of neuromodulation to treat epilepsy are responsive neurostimulation (RNS), vagal nerve stimulation (VNS) and deep brain stimulation (DBS).

Neuromodulation can be closed loop or open loop. Closed loop means the stimulation is provided in direct response to detection of seizure activity — this is how RNS works. Open loop stimulation lacks any detection and is how VNS and DBS work.

At Norton Children’s Neuroscience Institute, a multidisciplinary team evaluates patients with drug-resistant epilepsy, using video electroencephalogram (vEEG), magnetoencephalograms, stereo-EEG and many other tools to see whether surgery or neuromodulation would be most helpful for a seizure patient. For those patients in whom resection or disconnection is not an option, corpus callosotomy or VNS, RNS or DBS can be very effective, according to Dr. Mutchnick.

RNS is especially helpful in patients for whom resection is an option, but the part of the brain involved is too important to remove or disconnect. In cases like this, RNS can be very helpful; VNS can be used but is probably less effective for this kind of situation.

RNS is a closed-loop system that uses electrodes to detect seizures as they are about to happen and delivers a mild electrical current from a stimulator embedded in the skull, with the goal of preventing or stopping the seizure.

RNS is a good option if there are one or two seizure onset in areas that are eloquent — or have important functions. In this case, surgical removal of these parts of brain is too functionally costly.

RNS looks for abnormal brain activity indicating the beginning of a seizure. Because the device records brain activity, the data can be downloaded and used to fine-tune the system for an individual’s specific brain waves.

VNS sends regular, small pulses of electricity to the brain through the vagus nerve. The nerve is wrapped with electrodes in the neck, and the battery-powered stimulator is implanted in the upper left chest or behind the left shoulder. VNS is designed to reduce the number of seizures, as well as their length and severity.

Instead of sending regular pulses of electricity, another type of VNS looks for a rapid heart rate, which often signals a seizure, and delivers a stimulation in response to that.

To refer a patient to Norton Children’s Neuroscience Institute for refractory epilepsy, visit Norton EpicLink and choose referral to Neurosurgery.

A study following 14 patients with VNS that sent out regular pulses found a 50% reduction in seizure frequency after 14 to 35 months, on average. Two of the patients (14%) were seizure-free for over a year.

DBS delivers a continuous electric current to a precise spot in the brain, with the goal of blocking seizure activity altogether. For epilepsy, this spot is usually in the thalamus. Evidence emerging now indicates that DBS and RNS are equally effective in managing seizures.

Pediatric DBS has been most successful with implantation into the centromedian thalamic nucleus, with seizure frequency reduction of 30% to 100% in 17 of 18 patients in a 2019 study. Pediatric patients also have benefited from DBS placed bilaterally in the anterior thalamic nucleus. In specific situations, DBS implanted into the hippocampus, subthalamic nucleus, posteromedial hypothalamus and mammillothalamic tract has reduced seizure frequency. One risk in children is that continued brain growth and development with age may cause electrode or wire migration.

For children with drug-resistant epilepsy who have DBS, the change can be dramatic. One study of 13 children in Mexico who received deep brain stimulation for Lennox-Gastaut syndrome showed an overall 80% seizure reduction. Although three of the children showed no improvement, two were seizure-free. The remaining eight showed significant improvement.