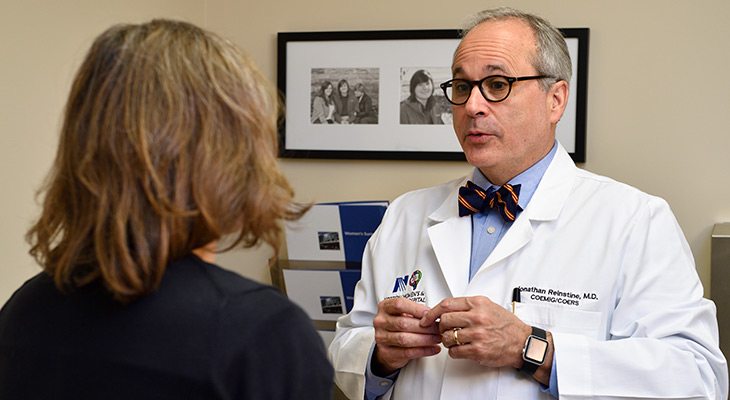 Jonathan H. Reinstine, M.D. has been a pioneer bringing new pelvic gynecologic surgical techniques to patients in Louisville and Southern Indiana. He performed some of the earliest laparoscopic hysterectomies in 1991.

Dr. Reinstine, an OB/GYN  with Associates in Obstetrics and Gynecology, a Part of Norton Women’s Care. was at the leading edge in developing laparoscopic surgery and hysteroscopy to treat fibroids, endometriosis and bleeding issues with less pain and recovery time.

The COEMIG and COERS programs are focused on improving the safety and quality of gynecologic patient care and are designed to expand access to minimally invasive gynecologic procedures performed by surgeons.

“An estimated 25 to 30 percent of women live with pelvic health issues,” Dr. Reinstine said. “The key to treating them is examining other functions of the body and bringing multiple specialists and services together.”

To refer a patient to Pelvic Health Program, please use our online form.

While many patients have been with him for years, Dr. Reinstine and the rest of the pelvic health team also help women who have not been able to find answers elsewhere.

“Sometimes we also need to start from scratch and take fresh looks at everything if a woman is not getting relief,” Dr. Reinstine said. “The main goal is finding an answer.”

Sometimes that can include new treatments for endometriosis and fibroids.

‘The art of surgery’

“I was going to be a pediatric surgeon originally,” said Dr. Reinstine. “But during medical school I worked with some gynecological oncologists and was attracted to the art of surgery for pelvic issues. It was a way I could make more of a difference for people.”

During his residency, he discovered even more.

“I really enjoyed the perfect mix of medicine and surgery,” he said. “I also really liked that I could have lifelong relationships with my patients. Obstetrics was also an unexpected joy as I was able to watch families grow.”