After a career in the U.S. Navy, orthopedic surgeon returns to Louisville

After a career in the U.S. Navy, orthopedic surgeon returns to Louisville

Now retired from active duty, Joseph A. O’Daniel Jr., M.D., recently returned home to practice at Norton Orthopedic Institute, where he specializes in hip and knee replacement surgery as well as shoulder surgery. 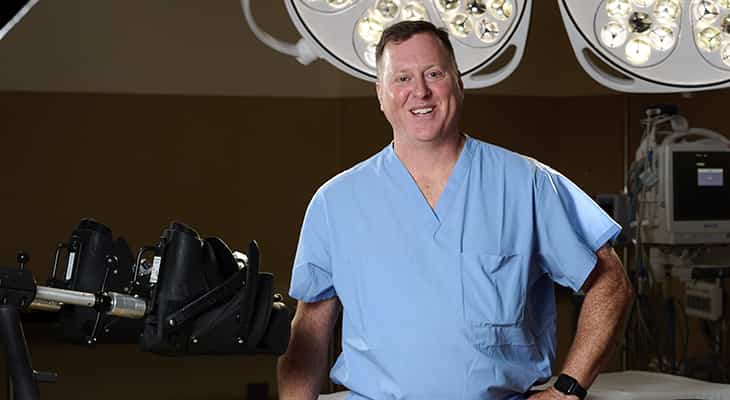 Joseph A. O’Daniel Jr., M.D., had his first experience with orthopedic surgery as a Trinity High School student. While playing basketball, he fractured a finger bad enough that it needed surgery.

He went on from high school in Louisville to the U.S. Naval Academy and served in Afghanistan and Iraq before returning to Louisville to get his medical degree from the University of Louisville.

After specialized orthopedic training, while serving as a Navy physician Dr. O’Daniel was stationed near Chicago at Naval Station Great Lakes in Illinois, where new enlistees go through boot camp.

Now retired from active duty, Dr. O’Daniel recently returned home to practice at Norton Orthopedic Institute, where he specializes in hip and knee replacement surgery as well as shoulder surgery.

“One of the biggest joys having served in the military was how we emphasized everyone’s role was critical in providing the best health care possible,” Dr. O’Daniel said. “In other words, when we roll into the operating room and perform a surgery, there’s so much work that goes in preoperatively to get the patient ready. Then, postoperatively, our internal medicine colleagues are keeping the patient healthy; physical therapists and occupational therapists are optimizing the patient’s recovery.”

Trying to practice outside the support of an organization like Norton Orthopedic Institute means either helping fewer patients or settling for less-than-optimal outcomes, according to Dr. O’Daniel.

“One of the really attractive aspects of Norton Healthcare, sort of equating them to the [New York] Yankees, is that they are going to do what they can to support that team concept so that we can really focus on providing the best surgeries and outcomes possible,” Dr. O’Daniel said.

Prior to joining Norton Orthopedic Institute, Dr. O’Daniel was with NorthShore Orthopaedic & Spine Institute, completing fellowship training on the latest advancements in robotic-assisted knee replacement procedures and in a technique for hip replacement that is less invasive than the previous standard.

“At NorthShore they really embrace emerging technology, so we had the opportunity to work with several different iterations of robotic-assisted and computed-navigation surgeries,” Dr. O’Daniel said. “The combination allows you to preoperatively plan your surgery in finer detail and also to minimize outliers in terms of keeping you on track.”

Before robotic surgical guidance, a good surgeon would be able to replace a hip aligned within maybe 5 degrees of the body with a consistently good outcome, according to Dr. O’Daniel. With the preplanning and precision guidance of the robot, the surgeon can achieve precision of about 1 degree and within a millimeter.

“That level precision to me, is fascinating and wonderful,” Dr. O’Daniel said, especially when working with the small percentage of patients who have complex or unusual anatomy.

‘Treating every person with dignity’

After graduating from the U.S. Naval Academy, Dr. O’Daniel served as a line officer for five years. He received a military scholarship and attended the University of Louisville School of Medicine. He trained at Walter Reed National Military Medical Center in Bethesda, Maryland.

During his time in the Navy, Dr. O’Daniel had the opportunity to serve in Iraq and Afghanistan, where he performed dozens of orthopedic surgeries. Dr. O’Daniel worked with a team of 16 health care professionals to provide care for Afghan locals who had been injured and to stabilize American soldiers until they could be evacuated.

During his time at Naval Station Great Lakes he cared for active duty personnel as well as veterans.

“The opportunity to work with our veteran population has given me more compassion. We all face struggles and we are all trying to do the best that we can as we travel through life” said Dr. O’Daniel. “Treating every person with dignity and respect are some of the core tenants that I strive for.”

Dr. O’Daniel’s wife, Andrea Metten, M.D., is a graduate of Assumption High School and is a pediatrician. The couple met their first year in medical school and look forward to be closer to Kentucky family in Bardstown and Louisville as they raise their children.