Severe scoliosis cases on the rise in children

Severe scoliosis cases on the rise in children 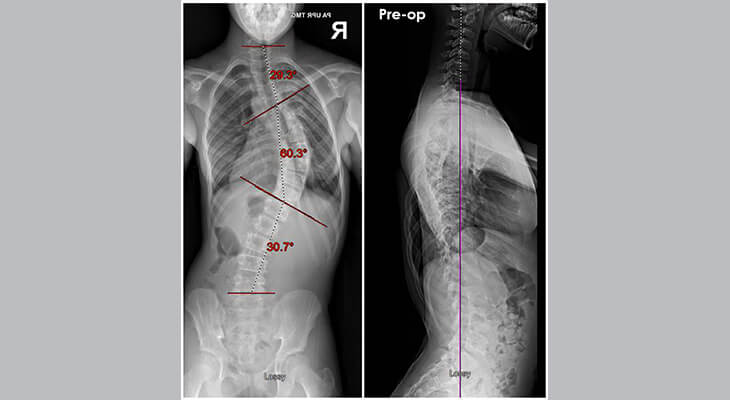 John R. Dimar, M.D., orthopedic surgeon with Norton Leatherman Spine Center believes the lack of scoliosis screenings in schools across the country may be contributing to the increase in severe scoliosis cases. Many school districts stopped screening for scoliosis several years ago, when it no longer became a state requirement.

“Some scientific articles suggest that because school screenings are no longer done, there’s been an increase in the actual number of cases that require surgeries,” Dr. Dimar said. “I think the school screenings were a catch bucket or safety net for scoliosis.”

Physicians determine the severity of scoliosis by using a calculation called the Cobb method to measure the angle between the most tilted vertebrae at the top and bottom of the spinal curve. Patients with a Cobb angle, or scoliosis curve, of 20 to 40 degrees are typically candidates for back bracing.

A recent patient of Dr. Dimar’s, twelve-year-old Aubrey Hinkle’s scoliosis curvature was at 65 degrees. A severe case like this makes surgery the only option for treatment.

If caught early, physicians can correct many scoliosis cases with bracing.

Early detection is key. In most cases, if diagnosed early enough, a brace can straighten the spine. The longer it goes undetected and untreated, surgery becomes the only option.

“Half the kids I see for scoliosis already have severe curves that have not been treated,” Dr. Dimar said.

During Aubrey’s scoliosis surgery, Dr. Dimar used a combination of spinal hooks, screws and dual rods to straighten out her spine. Following surgery, she gained about 2 inches of height and her shoulders evened out.

To refer a patient to Dr. Dimar, or with any Norton Leatherman Spine Center or Norton Children’s Orthopedics of Louisville provider, call (502) 301-7065 or click here for the online referral form.