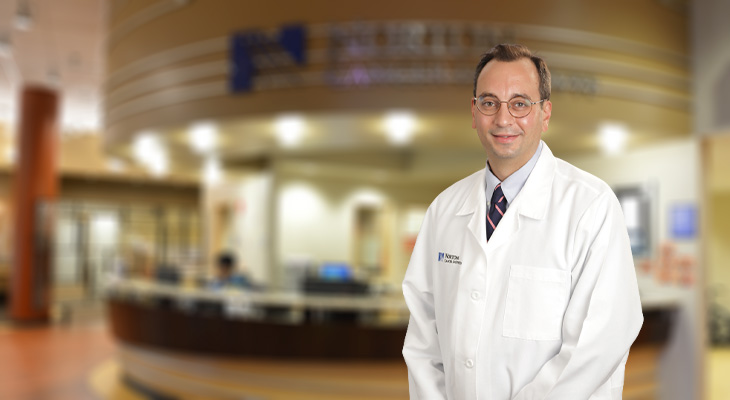 Ovarian cancer is personal to me. Two of my mom’s sisters died of the disease.

One of the major issues with successfully treating ovarian cancer is how late it is typically diagnosed: stage IIIC. At that point, the cancer has spread throughout the abdominal cavity, and there are distant metastases throughout the omentum.

Standard treatment is a combination of debulking surgery to remove the ovaries, uterus, fallopian tubes, omentum, lymph nodes and any other focuses of cancer in concert with six rounds of chemo. The disease usually responds well initially, but the cancer will recur in more than 80% of these cases.

During my fellowship in gynecologic oncology at the University of Kentucky, I looked at ways ovarian cancer might be diagnosed earlier. The future of gynecologic cancer care is diagnosing ovarian cancer before it has metastasized.

According to data from this screening trial, the estimated incidence of ovarian abnormalities is 8.2 per 100 women annually, but 70% of those cases have a unilocular or simple septate morphology, making them low risk for malignancy. The key is to accurately assess the remaining 30%.

Over the years, the screening trial has caught ovarian cancer early and saved lives, but it also has resulted in false positives. Because too many women have undergone surgeries for cysts that end up not being cancer, no major health organization currently recommends routine screening for ovarian cancer.

The diagnostic accuracy of transvaginal ultrasound is improving, however, thanks to the Kentucky Morphology Index Scoring System. The system uses tumor volume and tumor structure to give a score ranging from 0 to 10.

To refer a patient to Norton Cancer Institute, visit Norton EpicLink and open an order for Oncology.

For those patients whose screening score is moderate or high, one important management option for OB/GYNs is to take a series of ultrasounds, repeated at one- to three-month intervals, to see if the cyst is changing. If there is change over time, even if the risk is intermediate, then there’s a higher likelihood the cyst needs to be removed surgically. If it stays the same or becomes smaller, usually nothing needs to be done right away, and the cyst can be expectantly managed.

There are other indicators of risk. One of the studies I published looked at free fluid identified using the transvaginal ultrasound. If it identifies free fluid, the suspicion of cancer increases. Free fluid may be a precursor to ascites, a hallmark of advanced ovarian cancer. Papillary projections and elevated CA-125, a protein found in the blood, are other potential signs of cancer that raise the suspicion of malignancy.

In the future, we will have other, better screening tests for ovarian cancer. One screening modality that theoretically could show promise is a blood test for circulating tumor DNA. We’re not quite there yet, but my hope is we will soon be able to identify ovarian cancers earlier. In the meantime, we need to continue to use the tools we have to prudently identify women at a high risk for ovarian cancer.

There is nothing more rewarding than identifying a woman with an early-stage malignancy using transvaginal ultrasound and caring for her as if she were my family member.