Unlike delirium, dementia is a progressive and irreversible cognitive decline, a memory or cognitive impairment associated with a functional decline far from baseline. 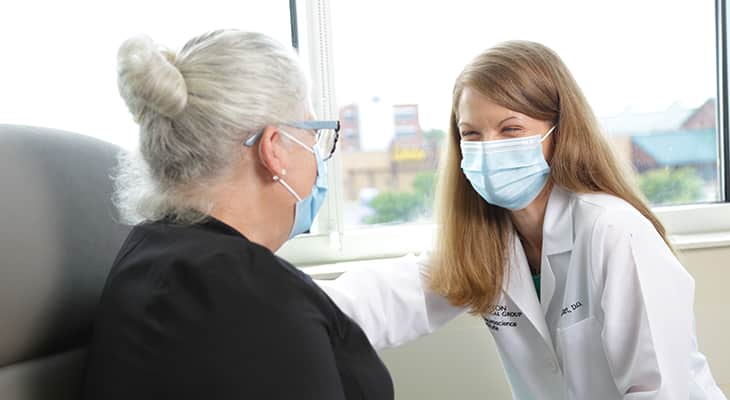 Delirium and dementia are distinct clinical syndromes, with symptoms that frequently overlap.

Delirium is a neuropsychiatric condition that occurs acutely, a sudden and definite decline from the baseline, progressing over hours, days, or weeks, but not longer. It is treatable and, in most cases, reversible. Delirium is common in hospitalized patients, especially among older adults. Some studies have shown up to 75% of older adults have some element of delirium during a hospitalization.

Common causes of delirium are infection, dehydration, withdrawal from certain medications or intoxication with certain medications, and alcohol. Delirium also may present because of the loss of a loved one or a change in a living situation, according to Carmel J. Person, M.D., a geriatric medicine provider with Norton Healthcare.

Because of their fluctuating sensorium, patients with delirium often have slurred speech, or slow or incoherent speech. Memory is impaired, as is orientation to time and place. Consciousness is variably impaired.

Unlike delirium, dementia is a progressive and irreversible cognitive decline, a memory or cognitive impairment associated with a functional decline far from baseline. Risk factors for dementia are age, genetics, vascular disease and, in some cases, environmental exposures. The most common dementia is Alzheimer’s disease.

Primary care providers usually can make the diagnosis of dementia, starting with a quick cognitive screen such as the Mini-Mental State Exam or the Saint Louis University Mental Status Exam. Another test, the Mini-Cog, is a three-item recall and a clock draw test. Impairment on either warrants further testing.

Family members often report a spouse, parent or sibling is just not acting right, unaware of an ongoing, underlying dementia, because seniors are adept at masking their symptoms.

“They learn how to compensate and hide those symptoms. And for some family members, it might appear that this is very sudden in onset, when in fact it has been developing for months, if not years,” Rachel N. Hart, D.O., a Norton Neuroscience Institute geriatric medicine physician specializing in memory and cognitive disorders, said on the continuing medical education podcast.

“Oftentimes I’ll get referrals where families of patients with dementia have said the first change they noticed was personality change or behavior change,” John J. Wernert, M.D., MHA, psychiatrist and executive medical director for Norton Behavioral Medicine, said on the “MedChat” episode. “Rarely does someone just present with memory issues and cognitive decline. Confabulation is common and seems to families that their loved one is making up answers to fill in the gaps in one’s memory. These are normal compensations for memory decline.”

Before a dementia diagnosis, potential medical causes of memory issues need to be ruled out. These include polypharmacy, which is common among geriatric patients, anticholinergic drugs and antipsychotics. Vitamin B12 deficiency, thyroid dysfunction — both hypothyroidism and hyperthyroidism — also can cause memory impairment. In young-onset dementia, a history will suggest if HIV is possible, and a brain scan, preferably an MRI, can show stroke or other structural causes.

Cholinesterase inhibitors can be helpful in stabilizing memory decline. They are rivastigmine, donepezil, galantamine. There’s also an NMDA-receptor antagonist, memantine.

“They’re indicated for dementia, but at best they can slow the disease progression maybe up to about two years,” Dr. Hart said, adding that it is important for families to come up with a long-term plan.

Antipsychotic medications carry a black box warning for long-term use in dementia patients, but can be helpful in the short term for patients with delirium, according to Dr. Wernert.

“If you’re confident that you’re dealing with a patient with delirium — remember, this is a short-term and reversible condition — then low-dose antipsychotics can be very helpful in managing the confusion or agitation,” Dr. Wernert said. “Just remember that is short-term, a number of days perhaps or maybe just a limited number of doses.”

Psychotropic medications given in hopes of calming behaviors or agitation long term comes with risks in geriatric patients and can result in adverse events such as falls, according to Dr. Wernert.

Referral to a specialist can help manage patients with neuropsychiatric symptoms, especially at the moderate stage of dementia, because specialists are familiar with the medications, including the safe dosing, frequency, and length of treatment, according to Dr. Hart.

Also, specialists are better versed on other dementias, such as Lewy body disease, frontotemporal dementia, primary progressive aphasia and vascular dementia, according to Dr. Hart.