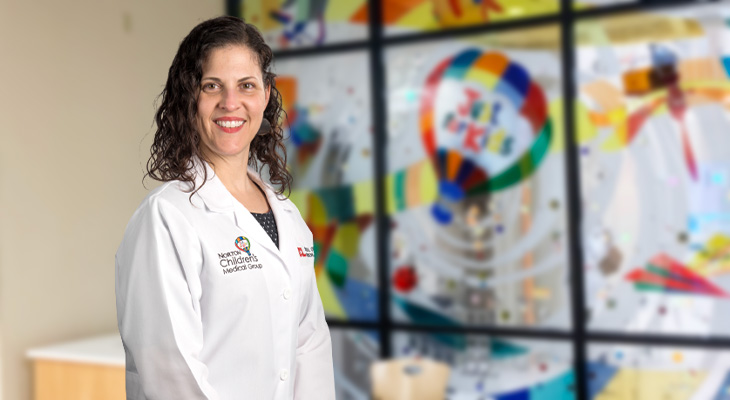 Diagnosing eating disorders can be challenging because telltale behaviors typically are hidden, even from those closest to the patient, according to Andrea L. Krause, M.D., who heads the team involved with the medical stabilization of eating disorder patients at Norton Children’s Hospital.

Anorexia has two subtypes: the classic restrictive subtype, and a subtype consisting of binging and purging. Means of purging include vomiting, excessive exercise, and misuse of laxatives or diuretics. Peak age of onset in pediatric cases is 13 to 18.

The restriction of energy intake with anorexia is accompanied by an intense fear of gaining weight, an undue influence of weight on body evaluation and significantly low body weight, which is not defined in the DSM-5.

The classic features of bulimia are binge eating within a two-hour period, with a sense of lack of control over eating, and compensatory behavior afterward, which could be purging, fasting or excessive exercise. The behavior also needs to occur over a three-month span or longer. Bulimia typically occurs in older teens and college-aged young adults.

A diagnosis of anorexia requires the patient to be underweight. Bulimia does not.

Anorexia is an ego-syntonic illness, meaning the patient sees their behaviors as completely acceptable and the way they want to live their life, Dr. Krause said during a recent continuing medical education opportunity, “Updates in Pediatrics: Diagnosis and Treatment of Eating Disorders.” Bulimia, on the other hand, is ego-dystonic, meaning there is intense fear or guilt and shame associated with the behaviors.

One of the main OSFED classifications is atypical anorexia, which has the same self-esteem and body image features of classic anorexia and the same restricted intake, but weight is normal. Even so, these patients may need medical stabilization. In fact, about 20% of all patients admitted for anorexia have atypical anorexia, meaning they have a normal body mass index (BMI).

ARFID is a new category of eating disorder, characterized by a lack of interest in food and eating. Extreme picky eating and a choking phobia are both examples of ARFID. Abdominal pain also can lead to restrictive food intake and weight loss. ARFID tends to occur in younger children, who can be as young as 4.

Patients typically do not seek help for eating disorders, meaning clinicians tease out signs of eating disorders from the physical exam and information shared by families. Family member reports often include:

Patients also often may become fixated on food and obsessively look at social media posts about food, according to Dr. Krause, who is a pediatric hospitalist with Norton Children’s Inpatient Care, affiliated with the UofL School of Medicine.

Clues of anorexia during a physical exam include flattened affect or a depressed state, pale skin, dry skin, cachexia and facial wasting, decreased muscle mass, thinning hair, and lanugo at the nape of the neck or the backs of the arms. Resting bradycardia, a heart rate below 50, is another red flag.

In long-standing cases of anorexia, a heart murmur can develop, which is essentially like a mitral valve regurgitation, according to Dr. Krause. Overall decreased circulation can result in acrocyanosis and palpable stool mass because of poor gastrointestinal (GI) motility, leading to constipation, according to Dr. Krause. Atrophy of the cortex also occurs in a state of malnutrition.

Another sign is delayed pubertal development because sex hormones need energy to develop.

Evidence of bulimia includes dental enamel erosions and Russell’s sign. Parotid gland enlargement and bruising can result from compulsive exercise or can occur just in a malnourished state from poor skin integrity, according to Dr. Krause.

A differential diagnosis of weight loss needs to rule out inflammatory bowel disease, GI disorders like celiac or achalasia, hyperthyroidism, Addison’s disease, hypopituitarism, Type 1 diabetes, and malignancies. Within the psychiatric realm, a differential diagnosis should consider depression, the start of stimulants for attention-deficit/hyperactivity disorder (ADHD), substance or opiate use, the use of diet pills, and early pregnancy.

Eating disorders are the second deadliest DSM diagnosis, with about half the deaths coming from suicide. The mortality for anorexia is 5% to 6%. Early identification of an eating disorder is associated with better outcomes, making early diagnosis critical.

“It can be very hard to overcome if the patient gets stuck in that state of starvation for years on end,” Dr. Krause said. “Early intervention is key.”