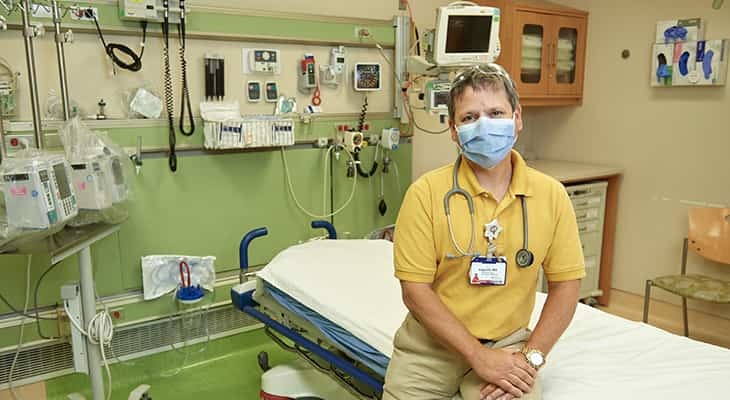 How febrile neonates are evaluated has changed based on data that’s come out recently.

If a child is less than 28 days old with a fever, they’re considered high risk and will get a full septic workup and lumbar puncture.

If a child who is 60 days old or younger is appearing ill or not breathing well, or doesn’t have good circulation, or has some chronic illness, they’re considered high risk. They also get a full septic workup and lumbar puncture.

For febrile neonates 29 to 60 days old who don’t meet these criteria, a new algorithm was adopted in June 2020.

Under the algorithm, physicians obtain a complete blood count, a blood culture, urinalysis, urine culture and a procalcitonin level for these children.

Procalcitonin is an acute phase reactant that’s produced by monocytes and hepatocytes. Expression of procalcitonin increases several hours after exposure to bacterial endotoxins, and levels remain elevated for at least 24 hours.

“This has been looked at as a marker for bacteremia and sepsis, and that’s why it’s important,” Dr. Caperell said.

The Pediatric Emergency Care Applied Research Network (PECARN), a National Institutes of Health-funded national consortium of pediatric emergency departments, did a prospective trial of febrile infants younger than 60 days to come up with a rule for who should get a lumbar puncture.

In a study published in JAMA Pediatrics in 2019, PECARN concluded that procalcitonin is a particularly sensitive marker for detecting bacteremia and bacterial meningitis in febrile young infants. The widely available test also requires only 200 microliters of serum and has a turnaround time of 30 to 120 minutes.

The study concluded that procalcitonin is a substantially better measure of sepsis than a white blood count (WBC) or absolute neutrophil count (ANC), and also surpasses C-reactive protein, possibly because of the “earlier rise of procalcitonin in response to systemic infection.”

Based on the new algorithm, febrile neonates ages 29 to 60 days with normal urine, normal ANC and normal procalcitonin are discharged from the emergency department.

“We ask that they follow up with the pediatrician the next day. That’s a big change from when I trained,” said Dr. Caperell, who finished his residency in 2008. Previously, these neonates would have gotten lumbar punctures and would have been admitted.

If the procalcitonin is normal but the ANC is greater than 4,000, these children are considered intermediate risk.

If procalcitonin is high, over 0.5, these children are considered high risk under the algorithm and would get a lumbar puncture, start antibiotics and be admitted to the hospital.

A new algorithm also governs pediatric patients who present in the emergency department with abdominal pain and possible appendicitis. The new algorithm has been developed to reduce unnecessary testing, particularly CT scans, even though a CT scan is 95% sensitive and 94% specific for appendicitis.

A Korean study published in JAMA Surgery in 2021 took a retrospective look over many years of patients who had appendectomies, comparing those had CT prior to the surgery and those who didn’t. The carcinogenic risk for patients 0 to 15 years who had a CT prior to surgery was double that of the patients who didn’t.

“The group that got a CT scan prior to that appendectomy was twice as likely to develop an oncologic process, mostly leukemia, at some point in their life compared with the group that didn’t get a CT. That’s really profound data,” Dr. Caperell said.

Given this risk, a new algorithm attempts to pinpoint appendicitis risk without a CT scan.

If a patient’s history and physical is consistent with appendicitis, their Modified Pediatric Appendicitis Score (mPAS) is assessed. With the score, anorexia, fever, nausea and vomiting, migration of pain are all worth one point. Peritoneal signs and right lower quadrant tenderness are each worth two points. A total of eight points are possible.

With the labs, if either white blood count (WBC) is over 10,000 or CRP is greater than 1, that’s worth one point. If absolute neutrophil count (ANC) is over 7,500, that’s another point.

“The reason we’re saying ultrasound of course is because there’s no ionizing radiation there. We don’t want these kids to wind up with leukemia,” Dr. Caperell said.

To refer a patient to Norton Children’s, visit Norton EpicLink.

One study found the specificity of an ultrasound is high, but a negative ultrasound did not rule out appendicitis. If the ultrasound is unclear, the algorithm calls for a surgical consult. This can result in three possibilities: admission for serial abdominal exams and ultrasound, discharge with a 24-hour surgery follow-up or a CT scan for a reasonable definitive answer.

An updated algorithm also governs bronchiolitis, determining which children need to be admitted, which need to go to the intensive care unit, and when it’s safe to de-escalate care.

The bronchiolitis score looks at respiratory rate, retractions, auscultation and feeding/activity, with a patient receiving a score from 1 to 12.

“I think this is the most challenging to pin down because the severity is a continuum. The way we quantify the severity, in my opinion, the tools are very coarse,” Dr. Caperell said. “But at any rate, this is really the best tool that we have.”

If the subsequent score is below 9, with no oxygen requirement, no apnea, adequate feeding and not dehydrated, and the family will follow up, the child is considered for discharge home.

If score remains 9 to 12, the child is on oxygen, has a history of apnea, poor feeding or dehydration, and follow-up not assured, the child is considered for admission.

The child is considered for pediatric intensive care unit (PICU) admission if respiratory failure continues despite high flow nasal cannula, if the child deteriorates during emergency department stay, has observed apnea, a toxic appearance and worrisome lab or exam findings.