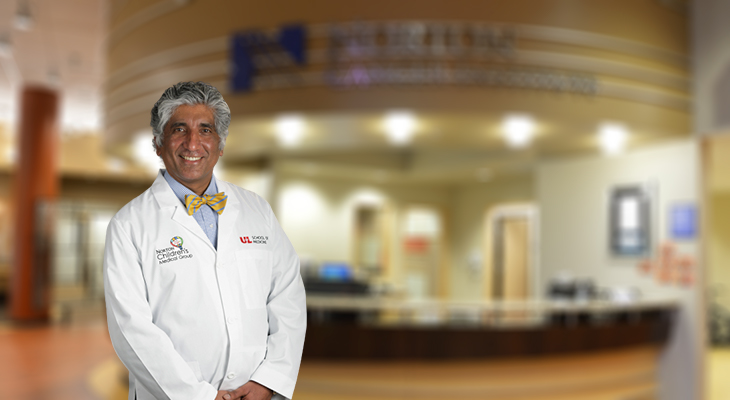 A 5-year-old girl arrived in the Norton Children’s Hospital emergency department in December with behavior that was frightening her parents and her siblings.

Earlier in the month, the girl began moving abnormally and had become prone to emotional outbursts. One day she repeated the word “puppy” over and over and then laughed hysterically. The next, she seemed afraid of her mother, whom she didn’t appear to recognize, and kept repeating the word “scared.” In the subsequent days, outbursts became worse and more frequent.

She was aggressive, banging her head and threatening to run away, according to Vinay Puri, M.D., pediatric neurologist with Norton Children’s Neuroscience Institute, affiliated with the UofL School of Medicine.

The kindergartner’s electroencephalogram (EEG) and labs were normal, and she had been diagnosed elsewhere as experiencing psychological issues. But the sudden onset of the symptoms suggested an organic basis to Dr. Puri.

“It is sometimes not the symptoms but the abruptness of symptoms or the quality of the symptoms that can point you in the right direction,” said Dr. Puri, a professor of neurology and pediatrics at the University of Louisville School of Medicine.

The girl’s family was healthy, and while the girl had been mostly healthy, in the previous year she’d had both a strep throat infection and a urinary tract infection.

PANDAS also has the concurrent presence of at least two of the following: anxiety, emotional lability or depression; behavioral regression; sudden deterioration of school performance; motor or sensory abnormalities; somatic signs and symptoms including sleep disturbances, enuresis, or urinary frequency.

The cause of PANDAS is not known, but it is thought to be triggered by infections, other inflammatory reactions or metabolic disturbances. Infection can result in antibodies attacking parts of a child’s brain. Dr. Puri estimated there are probably only five to 10 cases of PANDAS in Louisville each year.

Because of the behaviors associated with PANDAS, it can be misdiagnosed as obsessive-compulsive disorder or an eating disorder.

“It helps very much to listen to parents when they say, ‘This is a radical transformation. We don’t recognize this child,’” Dr. Puri said. “Children and parents can feel very misunderstood. They are scared and frustrated.”

Pediatric providers who suspect a sudden change in behavior may have an organic basis can refer a patient to Michael L. Sweeney, M.D., pediatric neurologist and director of pediatric neuroimmunology at Norton Children’s Neuroscience Institute; Dr. Puri; or John E. Gallehr, M.D., neuropsychiatrist and child and adolescent psychiatrist with Norton Children’s Behavioral & Mental Health, affiliated with the UofL School of Medicine.

Very mild cases of PANDAS can get better on their own. Other cases are treated symptomatically, with immune-modulating treatment such as steroids, IV immunoglobulin (IVIg) or plasmapheresis. For aggression or agitation, PANDAS patients may benefit from guanfacine or, in some instances, risperidone, according to Dr. Puri.

With the 5-year-old girl, Dr. Puri first put her on steroids. Her condition improved, but once weaned off the steroids, she got worse. Dr. Puri switched to monthly IVIg treatments.